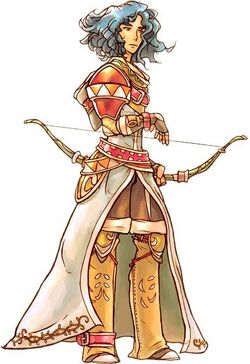 Pedda seperatists
v · e · d
A lieutenant of the Peddan Army. He accompanies Roget on his journey to destroy the Peddan commanding general, Baxilios, and the prince of Pedda, Inath. He is calm and mysterious and no one can ever tell what he is thinking.

Though initially the leader of the scouting party of Pedda, after the betrayal by their superiors, he becomes an advisor to Roget, teaching him how to use the ship and units. It becomes clear midway through the game that he has a deeper history with Baxilios, but keeps it to himself. He also is forced to endure near constant attacks by his rival Celestan, who is using this war as an excuse to fight him.

At the end of the game, after seeing Baxillos become possessed by Anise and become the goddess of doom, he is suddenly contacted by the spirirt of the real Cecelia. It is revealed that the two were gonna have a child, but she suffered from a miscarriage, which tore them apart and caused her to fall under the influence of Anise. Yurchael begs for her forgiveness for not being there to save her, but she tells him how to destroy the goddess of doom before being repressed by her Anise possessed persona. Yurchael tells Roget this information and the Goddess is destroyed. Yurchael is forced to watch his beloved vanish forever and decides to join Roget on his campaign against Anise and Psi across dimensions.

Retrieved from "https://mana.fandom.com/wiki/Yurchael?oldid=19625"
Community content is available under CC-BY-SA unless otherwise noted.