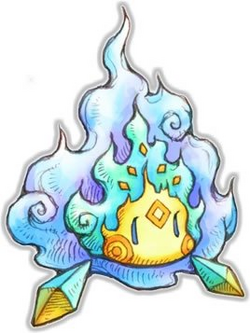 Wisp (ウィルオウィスプ Wiru o Wisupu), also known as Lumina, is the Mana Spirit of Light. She appears as a ghostly creature comprised of light and resembles the will-o'-the-wisp from which her name is derived. Her powers are somewhat varied, with lasers, orbs of holy power, barriers against attack, and other powers that could be seen traditionally as "divine retribution", with the addition of healing spells (formerly Undine's domain).

In many of her appearances, she often appears as cheerful and optimistic but doesn't get along with Shade. Her personality is the opposite of Dryad, who is more pessimistic and lacks confidence.

She is young girl who uses the first person pronoun boyish in SD3 timeline and Dawn of Mana.

She was the first spirit found in the game whose primary power is healing light and a light damage that may cause friendliness. The heroine had already obtained a wisp spirit at the start; it was seen by the hero on the Cascade Cottage which was summoned to heal him by the heroine after she mistook him for a Granz soldier. Even so, the hero wouldn't have Wisp magic until Cibba gave him one. It also took appearance together with Shade on unsealing the ruined passage.

Another Wisp may be obtained/upgraded by: 3 Dudbear gold by a woman named Asaad at Ishe Inn; trading a light geode found on Glass Dessert to Gazu of Lohimar; rescuing one trapped in Vinquette Hall from a black Dudbear (wisp level must be at least 30); praying to the Gray goddess statue outside of the batamo cave, morning/day(wisp must have at least 2 uprade); finding one outside Cascade Cottage on a Holy Day(must have done the upgrades stated before this); trading 10 Light Coins to Frolan of Khala Peaks(wisp must done at least 3 upgrades); and lastly blessing it on Wendel Cathedral on Holy Day(done at the last)

Upon obtaining all wisps you achieve the title Bishop. 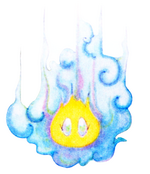 In Secret of Mana, Wisp is known as Lumina. She only grants her power to Primm and her spells are Lucid Barrier, Light Saber, and Lucent Beam.

Searching for Sage Joch, the party (Randi, Primm and Popoi) are directed to the Gold Isle to visit the Gold Tower which hosts the Light Palace. After getting into the tower and slaying the Blue Spike and Gorgon Bull, Lumina is waiting for the party at the altar on the top floor and joins the group by offering her powers which Primm can use. 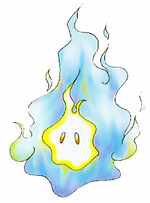 Wisp is the first Mana Spirit that joins the heroes. When the heroes visit the Holy City Wendel, the Priest of Light asks them to use the Mana Sword to return balance to the world. He tells them that the first step is to get the assistance of the Mana Spirits, starting with Wisp, who lives in the nearby Cave of Waterfalls. Once the heroes reach the end of the cave, they are attacked by the Full Metal Hugger; upon defeating the creature, Wisp appears and thanks the heroes for freeing her. She then joins them on their quest.

In the fan-made translation of Seiken Densetsu 3, Wisp is referred to as male. 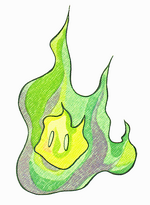 In the world of Fa'Diel, Wisp is regarded as the Spirit of Light, who bathes the world in light and governs its sacredness. 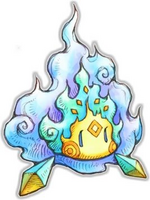 "Let the light guide you!"
—Wisp

Like her fellow spirits, Wisp can accompany the player character on their treks through Fa'Diel's myriad dungeons. Her attack and support spells, respectively, are as follows: 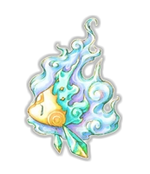 Wisp dislikes Shade and is very judgmental of him, despite Shade's claims that he has never done anything to deserve her animosity. Her spells are Twinkle Rain (for Belgar), Healing Light (for Roget, Yurcheal and D'Kelli) and Holy Saber (for everyone else).

In Dawn of Mana, Wisp is female and speaks with a French accent. She has a generally wise and self-assured demeanor. Her elemental power can blind enemies and has a particularly wide area of effect.

Retrieved from "https://mana.fandom.com/wiki/Wisp?oldid=19337"
Community content is available under CC-BY-SA unless otherwise noted.