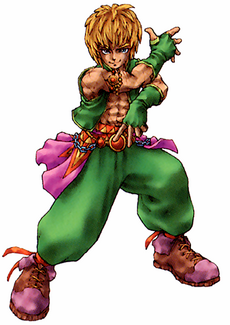 Willy is a character who appears in Final Fantasy Adventure and its remakes Sword of Mana and Adventures of Mana. In Sword of Mana he is a partner character, while in the other two versions of the game he's a minor character.

Willy is a friend of Sumo, the Hero, and a fellow gladiator. Right after the first fight in the game, Sumo discovers him mortally wounded in the castle. Willy informs Sumo that Mana is in danger and he must inform the Gemma Knights. He dies shortly afterwards. If his corpse is interacted with, Sumo will state his vow to avenge his friend.

Willy is a member of the Mana Clan, and was born and raised in the Mana Village, where he would happily spend his days playing with his friends, especially one particular girl. Unfortunately, these carefree days came to a fiery end when his home was razed by a mysterious man known as "Dark Lord", and he was captured by Heretic Hunters.

Following his capture, Willy was made a gladiator-slave living in the dungeons of Granz Castle, where he would soon be joined by a blond-haired boy and a feisty girl, with whom he would become fast friends. Willy quickly became infamous in the dungeons for his near-constant escape attempts, all of which ended in failure.

However, one of the soldiers, whom Willy claimed was Lord Granz himself in disguise, gave him extra bread and revealed an exit in the monsters's dens. That day, he learned that his friend was having bad memories with the girl they both knew in their childhood.

In their latest battle against the Jackal, during which he was teamed up with Hero, his latest escape plan actually succeeded and made plans to go to Topple, until he and Hero were found by Stroud at the castle bridge; Hero was thrown from the bridge after he attempted to attack Stroud.

Willy was returned to the dungeons, where he would soon by found and freed by either Hero or Heroine, the latter of whom he joins while Bogard freed the remaining prisoners. From here, he would join Hero, Heroine and their companions through the rest of the game, rejoining Heroine when she travels to the Subsea Volcano to find the Sword of Mana.

In combat, Willy comes equipped with knuckles and Undine magic. He only joins in Heroine's storyline, and does so twice:

Retrieved from "https://mana.fandom.com/wiki/Willy?oldid=24408"
Community content is available under CC-BY-SA unless otherwise noted.