The Were-Buster, also known as the Were Axe or Werebane, is a recurring weapon in the Mana series.

Typically a double-bladed axe with hooking, serrated edges, this weapon can inflict severe damage to werebeasts and certain other half-breed creatures.

The Were-Buster is one of several hidden weapons, found in a secret room within the Old Mansion. To find it, Sumo must locate a pressure switch on 1F to open a locked door, freeze a baddie on the switch, move to the right, then destroy all the rusters in a room full of coffins. The chest appears in the middle of the room. 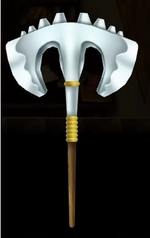 The Were-Buster is the fifth evolution of the axe.