Wiki of Mana
Register
Don't have an account?
Sign In
Advertisement
in: Characters, Article stubs, Secret of Mana Characters,
and 9 more

Watts (ワッツ Wattsu) is a recurring character across the Mana series, beginning from Seiken Densetsu/Final Fantasy Adventure and its remakes, Sword of Mana and Adventures of Mana. He is normally depicted as a dwarf with brown or reddish hair, usually wearing a helmet outfitted with horns. Although some incarnations of Watts are the same person, it is unlikely that all of them are the same character, owing to differences in the lore of each world in which the series has been set.

In Seiken Densetsu/Final Fantasy Adventure, Watts is a dwarf from the Dwarf Cave. He is first seen exploring the monster-infested Abandoned Mine in hopes of finding mythril with the help of a group of Dudbears, when a boy comes along, having heard about him from the other dwarves, and trying to obtain some mythril himself. Watts first believes the boy's appearance to be a mirage from working too hard, but is quickly (and humorously) proven wrong. The two quickly team up, battling the monsters inside the mine, and eventually finding a large mythril vein (guarded by Ankheg, who is defeated).

Back at the Dwarf Cave, Watts decides, after a chat with the Hero, that he will decide who to sell his weapons to, rather than work for anyone who pays him like the other dwarves. To this end, he will, in Sword of Mana, take up residence in the blacksmith room of the Hot House, where he forges new armor and weapons for the Hero/Heroine on request.

Watts is the blacksmith from the Dwarf Village and able to upgrade weapons through weapon orbs found by the heroes. He usually follows the player to almost every town, so there is no need to go back to the Dwarf Village to upgrade weapons. He gives Randi the Axe weapon. In the 2018 version, Watts speaks with a gruff North Atlantic American accent.

Watts plays a minor role as a master shopkeeper in Dwarf Village, but hands off his duties to an apprentice when the patron spirit of the dwarfs, Gnome, goes missing in the Dwarf Tunnels. He holds the explosive nitromyte and will give it the party for a hefty price; but if they refuse, he runs off to continue his search. When they finally catch up to him, the millennial beast known as the Jewel Eater attacks, forcing Watts to flee to safety. The creature's defeat releases Gnome and compels Watts to hand over the nitromyte as a gift of thanks for saving Gnome. This time, Watts speaks with a Southern American accent in both the 2019 adaptation and the 2020 remake.

Watts is involved in a few different side quests in the game, but he is worth pursuing as he teaches the character Blacksmithing, an art that allows them to assemble their own armour and weapons. In contrast to many of his other incarnations, Watts is considerably younger.

Mine Your Own Business[]

Path of the Blacksmith[]

Dawn of Mana and Children of Mana[]

This is possibly the only instance where the incarnations of Watts appearing in these two games can be regarded as the same person. This is owing to the fact that Watts is involved in both the events of Dawn of Mana and the aftermath of said game's events in Children of Mana.

Devoted to his craft as a master blacksmith, Watts diverts very little of his attention to the affairs of the world outside of forging and maintaining the repertoire of equipment in his workshop. This fact alone is responsible for him to be a rather absent-minded person, where he is known to readily misplace a variety of his personal possessions, ranging from his wallet to even the hammer that he wields to perform the bulk of his work.

Watts has also been proven to be rather dull-witted, a fact that is made especially evident in Niccolo's Business Unusual: Part 4; this quest see him foolishly believing that crafting a brand new wallet to replace the one he had misplaced will somehow in turn cause the lucre that he requires to repay his debt to Niccolo materialise.

In battle, Watts comes equipped with an axe, but no magic. He only joins in the Hero's storyline, and does so only once: for the journey through the Abandoned Mine. 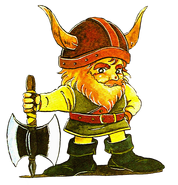 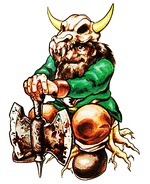 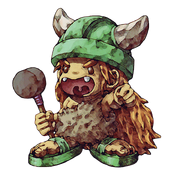 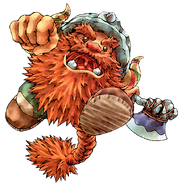 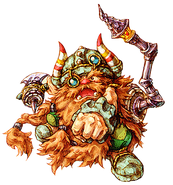 Watts' character model in the 3D remake of Secret of Mana