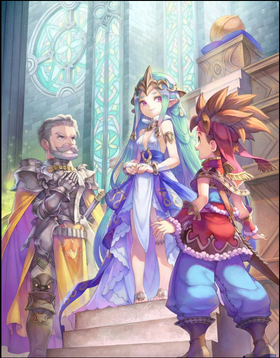 The Water Palace is the very first palace in the game Secret of Mana. Luka is the guardian of the Water Palace and a friend of the water elemental Undine.

There are two methods to reach the Water Palace.

1. You can go for the simple way by having a ride via the Cannon Travel Center it is free, since Jema paid for you already.

2. The longer way is by foot. Just follow the path, while beating Rabites, Lullabuds and Mushbooms.

Be sure not to take the path to Pandora since you can not enter it. You can stop by at Neko's place, where you can sleep, save and shop. Neko's prices are doubled, so you should only buy things you cannot get elsewhere. As of this moment, you do not need anything.

In front of the Water Palace is Major Dyluck with a gang of soldiers who are about to leave to splat Elinee, a witch. But that's later and none of your business as of yet, so head into the Water Palace. Jema's been waiting for you.

Now that you are inside, head all-forward...by doing absolutely annoying things to form bridges and everything. Meet up with Sage Luka, who tells you about the weird things happening, and more. After Jema leaves, say hello to Luka again. Choose any options for different dialogues, but at the end say okay, to do some trippy effects with your sword. When you are about to leave, Luka heals you and lets you save, and grants you the Spear.

On your way back, you will get captured by Goblins (this will only occur if you saw Major Dyluck and co. go off). If so, watch the sequence (you're about to get cooked, then an unidentified girl rescues you and leaves). Back on the path you were on a while earlier, travel back to the fork and go south.

After defeating Pandora Ruins, Jema will tell you to returnt to Luka. She will reveal that someone has stolen the Water Seed and they can be found in Gaia's Navel.

When Scorpion Army has been defeated, return the Water Seed to the Water Palace. In front of the entrance are many Iffishes. Inside the palace are Water Thugs. Fight your way to the end of the palace, where Luka is held captive by people from the Empire, lead by a person named Geshtar. He aims for the Water Seed that you've got. You have the option of giving it or trying to run off. Regardless of which option you choose, they will get the Mana Seed and feed you to Jabberwocky, Geshtar's pet.

After the Boss battle, speak to Luka. Jema's there, who brags about him defeating the monsters in Pandora. The better thing is that he gives you a Whip's Orb! Luka says you must reseal the Mana Seed, so run up to it and gain its power again. Jema said that he will be going home to take care of any business there, and that you must go to the Upper Land via the Cannon Travel Center near Potos. Luka says also that you must visit Sage Joch in the Lofty Mountains to learn about courage... this is where the REAL journey begins.