Vuscav (ブースカブー, būsukabū?), also known as Booskaboo in the fan translation, is a supporting character in Trials of Mana. A giant amphibious creature who can be summoned with the Ferry Flute on certain beaches, he can transport the party across the sea.

Vuscav appears as an oversized sea turtle with a crude red pennant flag stuck in the center of his shell. Closer examination reveals other aspects inconsistent with turtles: a webbed fish fin resembling a Mohawk on the crown of the head, more webbing on each upper arm, the beak and talons or webbed feet of a seabird, and dive goggles for glasses.

Vuscav is said to detest most humans and thus refuses to answer to their requests for aid. However, he appears to be acquainted with mana faeries and will assist them without question.

Elena turned two of Vuscav's species into zombies and had them attack her enemies. It is not known whether this act contributed to Vuscav's distaste of humans.

As the party awakens on Beuca Island, they observe the strange creature swimming close to the coast, and are in wonderment as to what it might be. However, their larger priority is getting off the island before the active volcano blows. In Tomato Town, the villagers mention the "ruler of the seas" that may help them.

Heading for the Seaside Cavern at the opposite end of the island, Gnome clears a landslide blocking the heroes' path. But, as they rush to meet the supposed deity, Malocchio corners the party in the depths of the cavern. He decides to leave them stranded just as the volcano erupts. In an instant, Vuscav beckons them to board and make their escape. He then swims mightily toward the Golden Road to drop them off, for which the Chosen thanks him.

Upon their return to Valsena, the Hero King is in shock that the party has befriended the normally reclusive creature. Before sending them to meet the remaining elemental spirits, he gives them the Ferry Flute to summon Vuscav at will.

The party automatically obtains the HP Boost II Chain Ability upon being saved by the creature. The player can also earn the achievement "Ruler of the Seas" upon calling Vuscav for the first time. 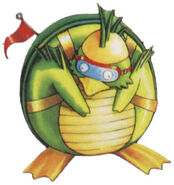 Vuscav's species is most likely inspired by the Kappa, a creature from Japanese folklore, which is often depicted as green and scaly humanoids with webbed hand and feet, as well having a turtle shell on its back. The Kappa is sometimes depicted with a beak.