Emperor Vandole (ヴァンドール皇帝 Vandōru Kōtei) is the ruler of the namesake Vandole Empire in Secret of Mana and the backstory of Final Fantasy Adventure and its remakes, Sword of Mana and Adventures of Mana. He is a major villain in Secret of Mana, who appears to be the main antagonist but was in fact manipulated by his generals Thanatos and Fanha, who kill him when they no longer need him.

Vandole is stated to be the father of Julius in the backstory of Adventures of Mana and is stated to have been killed when the Vandole Empire fell.

A different Vandole appears in Secret of Mana, seeking to unseal the eight Mana Seeds to obtain the Mana Fortress and take over the world of Fa'Diel. He is seconded by a quartet of immensely powerful generals: Sheex, Geshtar, Thanatos and Fahna, and the five of them have sold their soul to Mavolia to gain dark powers and control over monsters.

It is stated that the Empire was peaceful up until about fifteen years before the start of the story. Shortly after, Serin, the Mana Knight and father of the main hero Randi is killed by the Emperor and Thanatos, and forced to seal the monsters of Mavolia by planting the Sword of Mana in a rock before expiring.

Shortly after releasing the Sword of Mana, and inadvertently unsealing the monsters, Randi is told by Jema that the Empire is invading the nations of the world in a bid to unseal the Mana Seeds and get control of the Fortress. Randi, Primm and Popoie fight back the monsters and confront the generals controlling them time and time again, while Jema and the powerful Republic of Tasnica is fighting back against the Emperor's regular army.

Randi and his friends meet Emperor Vandole when he fakes a parlay to trap them and the Resistance in the prisons of the Imperial Palace, which is later destroyed in a battle against Gesthar after the heroes manage to escape.

Much later, the heroes confront the Emperor in the Tree Palace. He prepares to fight them himself, but Sheex asks to fight in his stead under his demonic form. While the evil general is destroyed, it gives Vandole time to raise the Lost Continent. The heroes venture into the sunken Grand Palace and destroy Hydra, right before stumbling upon Vandole and Fahna. Fahna wants to avenge her comrades, but the Emperor coldly states that they are insignificant in front of the Mana Fortress.

At the end of the Grand Palace, the heroes stumble upon Vandole's corpse. They then catch up with Fahna, who admits to killing him and being in league with Thanatos, the real mastermind behind the plot who was manipulating the Emperor from the start. Fahna is killed but Thanatos successfully unleashes the Mana Fortress and destroys the Mana Tree, but he and the ancient weapon end up destroyed once and for all by the heroes.

In Secret of Mana, Emperor Vandole appears as a rather typical villain: cruel, uncaring, power-hungry and hell-bent in subjugating everything and everyone in the world, ruthlessly squashing any obstacle on his path. He is cold, regal and extremely arrogant, greatly underestimating the heroes despite the consistent thorn in his side they proved to be. He is callous to the point of only viewing his devoted generals as mere assets, being completely indifferent to Sheex's death, contrary to Fahna.

Artwork of Emperor Vandole when posing as his son Julius in Sword of Mana. Design by Koichi Ishii. 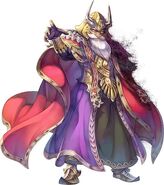 Artwork of Emperor Vandole from the Secret of Mana remake by Masaru Oyamada, based on his original sprite.

Artwork of Emperor Vandole and his generals from the Secret of Mana remake by Masaru Oyamada, based on their original sprites.
Add a photo to this gallery

Retrieved from "https://mana.fandom.com/wiki/Vandole?oldid=24890"
Community content is available under CC-BY-SA unless otherwise noted.