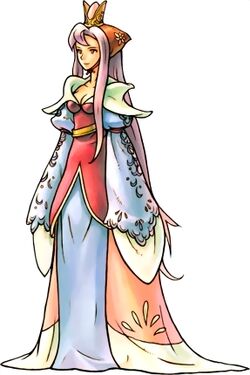 Kingdom of Altena
v · e · d
Valda is a playable character from Heroes of Mana as well as a major antagonist in Trials of Mana.

Princess Valda is the current heiress of Altena. She joins Roget and his team in Valsena where she was to support Prince Richard during the Peddan attack on Valsena. As Valsena falls the party flees to Altena, but Altena Castle eventually falls as well and Valda joins the party more permanently. As the current Queen is implied to have died in an last effort to defend Altena Castle, she technically already is the Queen of Altena for the majority of the game, a role she is later seen in during the events of Trials of Mana.

Grief for her mother temporarily renders her catatonic, but then causes her to unleash her magic in a fiery explosion that kills several dragons and causes the Peddan perusers to flee. She then joins the party for the rest of the game.

She seems close to Richard and it is in fact implied that Angela may be their daughter.

Valda plays the role of an antagonist this time, though there is a plot twist related to that. She is the mother of Angela and plays a dominant role in her and Duran's story arch. Out of the "three evils", she is allied with the Dragon Emperor's faction.

At earliest, Valda is seen in Angela's prologue where it is explained that her magic keeps the kingdom of Altena warm and temperate. But as Mana is fading, the cold is creeping into the city and inside the castle. She is present at the throne room where Koren of the Red Lotus, her right-hand man, declares to the gathered Altenan magicians, of their plans to breach the Mana Holyland and obtain the Sword of Mana. Koren further explains that they need the eight Mana Stones and that they need to prepare to invade those countries that possess a stone of their own, to take them by force, for it is unlikely the stones will be handed over to them willingly. Koren finally declares that Altena will evolve into a glorious Magic Empire and with the Mana Sword in the Queen's hands, spring will finally return to Altena.

Valda is soon seen in Angela's flashback where she sits on her throne, completely ignoring her young daughter. It is explained that she never scolded or embraced her daughter which is why Angela grew up to a selfish, people bothering, trouble maker, for she secretly wished her mother would notice her.

Angela is soon summoned to her mother's presence and after entering the throne room, Koren, at his Queen's side, explains about their plans to invade other countries for their Mana Stones in order to open a gate to the Mana Holyland. They must release the energy of the stones so the gate will open. They will start with releasing the energy of the stone near Altena. Angela wonders how and the Queen explains that they must use the forbidden Sealed Ancient Magic which will claim the life of the caster. Valda explains that it is not for her nor Koren to die, so they have come to a decision to use Angela's body as a catalyst. By sacrificing Angela's life, they could release the energy of the Mana Stone. Angela is shocked to hear this from her own mother and demands to know how she could approve this to which Valda replies that she always considered Angela a shame of the Royal Family for being unable to cast magic. By dying, she could at least be remembered as a user of great magics. Angela was so upset that she unconsciously tapped into her magical powers and teleported outside the borders of Altena. Unable to find her, Valda and Koren ended up using someone else's life to release the energy of the Mana Stone.

Add a photo to this gallery
Retrieved from "https://mana.fandom.com/wiki/Valda?oldid=19474"
Community content is available under CC-BY-SA unless otherwise noted.