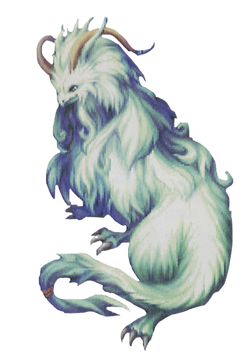 Official artwork of Vadise from Legend of Mana.

The Dragon Princess
Guardian of the Forests

Vadise (ヴァディス Vadisu) is a major boss character from the Dragon story arc of Legend of Mana. Revered as the Dragon Princess, Vadise resides in The White Forest, where she stands guard over the Mana Stone that she has been entrusted with. She commands the fealty of Sierra, who serves as her personal dragoon.

Of the three protectors of the Mana Stones, Vadise is of a disposition that is significantly milder and genteel, seeking to resolve problems that come her way through pacifist means instead of resorting to violence. This fact is made especially evident in The Dragon Princess, where she stops Sierra's attempt to lay siege on Larc, thereafter calmly surrendering the Mana Stone to him.

Vadise is also known to be one who is immensely benevolent, a fact that sees her selflessly expending her draconic power in order to protect both Sierra and the Hero/Heroine from perishing in the midst of the uprising of The Flames. This benevolence of hers is one that is further extended through her assuming a spiritual form for the purpose of continuing to provide guidance to Sierra and the Hero/Heroine at the entrance of The Flames.

Retrieved from "https://mana.fandom.com/wiki/Vadise?oldid=12173"
Community content is available under CC-BY-SA unless otherwise noted.