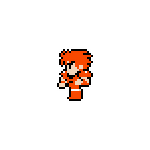 'Ello, 'ello, 'ello! 'Ow's life? Right, I've got a terrible Cockney accent, even if it is in writing. Just breaking the ice, folks. How'd I do?

Swordzman here. Been kicking around various games since I was a teen. Started by watching a few friends play things like Final Fantasy IV and Final Fantasy VI, but got into it myself with an old Nintendo Power guide and The Final Fantasy Legend. HUGE Square (Enix) guy since...1990-something?. Anyhow, I am a self-described "gimp" with Cerebral Palsy. Trust me, it only sounds scary. Means I'm only able to work with roughly half my body and that I run on six wheels most of the time. Samatayu? Never met a gimp with a brain?

You'll find I've done a fair bit of stuff over at FFWiki, and that's what brings me here to WoM. At heart, I'm just a guy with too much time on his hands who loves to write when he's not stomping PC issues. Secret of Mana Mobile was my first pickup in the Manaverse. Though I have not beat it, it was worth picking up the 2018 remake to take a look at what's new.

You need something, I'll get to it when I see it. Above all, stay frosty while you're here!

Retrieved from "https://mana.fandom.com/wiki/User:Swordzmanp236?oldid=14343"
Community content is available under CC-BY-SA unless otherwise noted.