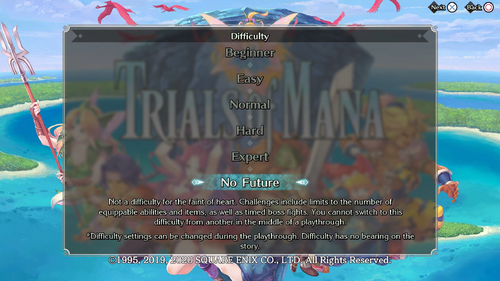 There are four difficulty levels in the original version release of the 3D remake of Trials of Mana. The difficulty settings can be changed during playthrough and has no bearing on the story.

"Beginner difficulty setting for those who wish to focus mainly on the story. You can resume in the same spot no matter how many times you get a game over."
—3D Opening menu

On this difficulty, enemy groups spawn less likely and are faster to kill. In addition, player characters can resume from the same spot no matter how many times they are defeated.

On this difficulty, enemy groups spawn normally but are faster to kill compared to the normal setting.

This is the standard difficulty. Enemy groups spawn normally and take time to kill.

On this difficulty, Enemy groups are harder to kill and will spawn more often.

As of the release of its 1.1.0 update on October 14, 2020, the game now features two additional difficulties.

"An even harder difficulty for seasoned players. Make use of the "New Game Plus" option to retain gear and chain abilities from your previous playthrough. Challenging difficulty setting for action game pros."
—3D Opening menu

"Not a difficulty for the faint of heart. Challenges include limits to the number of equippable abilities and items, as well as timed boss fights. You cannot switch to this difficulty from another in the middle of a playthrough."
—3D Opening menu