Trent (トレント Torento) is a recurring character in the Mana series, debuting in Legend of Mana. The Guardian of Nature, Trent takes on the form of an anthropomorphic tree, manifesting as a fruit and vegetable-bearing entity in his first two incarnations. Trent is similar to Gaia, the Guardian of Earth, in many regards, an entity to whom he is linked in one way or another.

Trent plays the role of a fruit bearing tree, found in the orchard inside the Hero's Hot House. If you give him at least two seeds at a time (maximum being eight), and come back to the orchard right after exiting, you will find different kinds of fruits, whose purpose is to serve as tempering items to improve your gear.

Trent and Gaia appear to the player in order to assist them against the Mana Lord. Both of them were also involved in the events ten years ago, but disappeared afterwards and were not seen till the events of Children of Mana.

*SPOILER WARNING* As the guardian of the Mana Sword, Trent undertakes the responsibility of keeping it safe, and out of evil hands. Since he has suppressed the power of the Mana Sword within him for a long period of time, he grew weak, and the sword eventually overpowered him, turning him into Grim Trent, and resulting in a boss battle. It is Keldric's job to defeat Grim Trent, and free him from the sword's power. When the battle is over, Trent returns to normal after spewing out the sword. Soon after, he disappears, entrusting Keldy with the responsibility to save the world and directing Keldric to his next location, Mortmont, the Mountain of Death.

Trent's energy manifests itself as special trees carrying Trent berries, all over the world. These berries are one of the two resources needed to build and summon units, the other one being Gaia stones.

To defeat Grim Trent, you must attack him with your weapon on his weak spots, which are the light blue crystals you see all over his mouth at the based on his tendrils. The tactic, is to first, take care of the tendrils by attacking them with your weapon; you can still do damage to the tendrils even if the crystal are not exposed, though you will do twice as much of damage when they are; keep in mind that when you're attacking the tendrils, you are doing damage to the individual tendril and not him. During the battle, he will attack by sending his roots underground and surfacing under you, sweeping them horizontally around the battle terrain, and summoning Grim Rabites. Make sure you're constantly on the move, and taking care of the Grim Rabites, because they can be very bothersome in large amounts. After the tendrils are taken care of, he will drop a fruit known as Bumpkin, which is the key item to defeating him. Fling the Bumpkins at him with your vine whip, since they explode on contact, which in turn will set Grim Trent on fire for a few seconds and send him into a panic; the Bumpkins can also be use to set the tendrils on fire and exposed the crystals on their base.

Now, this is your chance to attack the crystal in his mouth - since it is the only way he will allow access to them, giving you the opportunity to do direct damage to him. You can also fire flame pebbles at him if you got Salamander's ability at your disposal, though the pebbles won't be enough to defeated him; one, because of their low quantity, meaning you'll run out eventually, and two, the amount of time they set Grim Trent on fire is significantly shorter than that of the Bumpkins. It is best if you save them until you have gotten his HP to at least its half way mark, because at that point, he will intensify his attacks, making it harder for you to properly aim when throwing the Bumpkins. Keep doing this, and you will defeat him in no time. 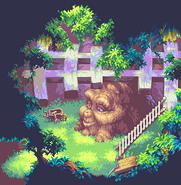 Trent, as he appears in Sword of Mana.

Trent interacting with Ritzia in Dawn of Mana.

Treant transforming into Grim Trent in Dawn of Mana.

Trent, as he appears in Rise of Mana.
Community content is available under CC-BY-SA unless otherwise noted.
Advertisement