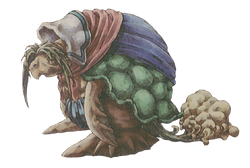 Official artwork of Tote from Legend of Mana.

Tote (トート Tōto) is a character from Legend of Mana. One of Seven Wisdoms existing in the world of Fa'Diel, Tote is an ancient anthropomorphic turtle who leads a life of placid tranquility in Lake Kilma, a fact that is complemented by his mild, phlegmatic personality. He is known to only introduce himself as "Turtle".

Tote later reappears in Sword of Mana as the third Wisdom that can be acquired by players. He functions as the wisdom of Water in this game.

Although Tote has been accorded the venerated title of Wisdom, he does not immediately display the insight and experience that is responsible for elevating him to such a position, leading to many doubting his credentials. In The Gorgon's Eye, he takes on the subterfuge of an eccentric old person with an odd abandon to exercising caution; his actions on the islet adjacent to Lake Kilma prove as much, as he hurls the statue of Cap'n Tusk into the lake to force the Penguins to dive into the water to act as bait to attract the Gorgon.

It is through this same event that one sees some facets of Tote's wisdom; he is evidently one who does not falter or hesitate in executing plans of whose success rate he is confident, even in the face of overwhelming doubt.

Tote's wisdom is also further explored when meeting Bud; his inclination to be practical shines through in his advice, as he debunks Bud's naive belief that speaking to the Wisdoms is a prerequisite to becoming a powerful sorcerer. Hints of Tote being of naturalistic leanings are made apparent here as well, as his advice for Bud to listen to the "grass, rocks, water and wind" points towards a belief that forming a symbiotic relationship with nature will bestow immense power to oneself.

Tote's magic being harnessed in Sword of Mana.
Add a photo to this gallery
Retrieved from "https://mana.fandom.com/wiki/Tote?oldid=11987"
Community content is available under CC-BY-SA unless otherwise noted.