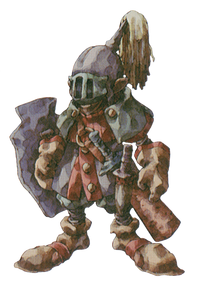 Official artwork of Thoma from Legend of Mana.

Thoma (衛兵トーマ Eihei Tōma, lit. Guard Thoma) is a character from Legend of Mana. 28 years of age, Thoma is a soldier from The Deathbringer's Army, and is the older brother of the deceased Thona. Like the rest of his brethren, Thoma's mind is under the control of the Deathbringer, causing him to be blindly loyal to the liege he serves.

Despite being a militiaman and a brainwashed member of the notorious Deathbringer's army, Thoma's inherent character appears to be unsullied by both influences; in all his appearances, he is portrayed as one who is polite in his mannerisms, regarding even the rudest and coarsest of individuals with respectful patience. His actions in Drowned Dreams prove this, as he responds to Inspector Boyd's initial display of hostility with mellow calmness and deals with Basket Fish's flagrant arrogance with an air of quiet dignity.

Thoma has also been revealed to possess a loving spirit, one that he directs towards his family; heading to the beach in Polpota Harbour any time after Drowned Dreams sees him tenderly laying a bouquet of flowers on the tip of the protruding headland as a sign of devotion for his deceased brother Thona.

Retrieved from "https://mana.fandom.com/wiki/Thoma?oldid=12544"
Community content is available under CC-BY-SA unless otherwise noted.