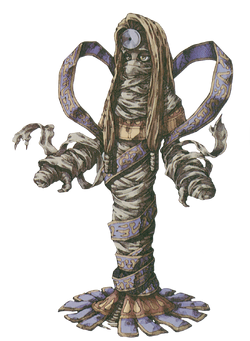 Official artwork of Thesenis from Legend of Mana.

Thesenis (テセニーゼ Tesenīze) is a character from Legend of Mana. Also known as the Witch of Reincarnation, Thesenis is, alongside Mephianse, Kathinja and Nunuzac, one of few professors presiding over Geo's Academy of Magic. A rather eccentric character who is thickly cloaked in a veil of mystery, Thesenis is avoided by practically everyone in the Academy, save for Kathinja, whom she is personally acquainted with. Although not explicitly elaborated on or even referred to, it is known that Thesenis is the ex-wife of The Deathbringer, once working alongside him as the Mage Minister of his kingdom.

The most obscure of the four professors managing the Academy of Magic, Thesenis is shrouded in a thick veil of mystery, and not much is known about her character. She is known to be eccentric and terrifying in her mannerisms, a fact that is first revealed by Esmeralda in Geo, who divulges that she has a habit of collecting girls' hair, and also in The Field Trip, where she suddenly warps into the scene of the herb gathering unannounced, scaring the students and Flowerlings alike.

The fact that Thesenis is swathed in bandages that resemble those used for mummification could possibly indicate that she is a reanimated corpse, functioning as a nod to her past as the wife of The Deathbringer.

Retrieved from "https://mana.fandom.com/wiki/Thesenis?oldid=18588"
Community content is available under CC-BY-SA unless otherwise noted.