Wiki of Mana
Register
Don't have an account?
Sign In
Advertisement
in: Characters, Secret of Mana Non-Player Characters, Villains

v · e · d
Thanatos (タナトス Tanatosu), titled the Mystic Knight, is a major antagonist in Secret of Mana. He is an extremely powerful dark sorcerer who long ago sold his soul to Mavolia for immortality. He appears as one of Emperor Vandole's four generals, but is revealed as the true main antagonist of the game and the real power behind the plot to raise the Mana Fortress.

Thanatos' true form is known as the Dark Lich. He is described as a being of pure evil feeding on hatred and destruction, whose spirit lives on by taking over mortals as his vessels. It is explained in the uncut Japanese version and the remake that his evil might is too much for normal vessels to handle, causing them to eventually crumble into dust. As such, he searches for the perfect vessel, which he finds in the form of Dyluck.

He is powerful enough to enslave entire towns, seal spells to prevent their use, and to perform many acts of high-level magic. He is collected, suave and falsely courteous, but cruel, ruthless, wrathful, spiteful, manipulative and haughty.

The party first learns of his existence from his mind slave, the witch Elinee, who describes him as the head of the conspiracy seeking to topple the kingdom of Pandora. They later meet him in the Pandora Ruins, where he reveals he was the one who was stealing the life-force of the citizens, turning them into living zombies at his command. He then reveals his intent to make Phanna and Dyluck his servants, before throwing the party into battle against the Wall Face.

They meet him later in the Northern Ruins, where he uses a brainwashed Dyluck to capture Primm. Randi and Popoi rush to save her, but it is Dyluck who saves her after resisting the sorcerer's control for a short while. Enraged, Thanatos orders Vampire to get rid of them before departing with Dyluck, but leaving Phanna whom he no longer needs.

After the Emperor raises the Lost Continent and breaks the seal of the eight Mana Seeds, Thanatos and his fellow General Fanha kill the now useless Emperor and proceed to attempt to use the Mana Fortress to take over Fa'Diel for themselves. After the party kills Fanha's demonic form Hexas, he forces them to fight Geshtar, whom he turned into an undead cyborg as the last Mech Rider. He later takes control of the Mana Fortress and waits for the party to reach the Mana Tree, to destroy it before their very eyes.

After the Tree restores the Mana Seeds, the party invades the Fortress and reaches its inner sanctum, confronting their enemy at last. Thanatos reveals that his current host is decaying, and that he plans to replace it with Dyluck, the perfect host he needs to become all-powerful and rule the world for eternity from the Mana Fortress. Primm grievously wounds him, and Dyluck sacrifices himself to prevent him from hijacking him, forcing him to appear under his true form of the Dark Lich and desperately attempt to claim the heroes' bodies, but the heroes destroy him for good and put an end to his madness.

With Dark Lich gone, Dryad's Mana Magic that he sealed becomes available again, enabling the party to use it against the Mana Beast, who rose because of his actions. In the end, the Beast and the Fortress are destroyed, but Mana is gone for the world until the Mana Tree is regrown, making the victory bittersweet.

Characters should be at least level 70 or higher. Lumina, Dryad and Undine should be level 8, if nothing else. He has a variety of attacks as well as a heap load of spells to throw at you. He can cause the frozen, blazing, poison, petrified, unconscious, confuse, shrunk and Moogle status effects, so cure often.

When Dark Lich's full body is out, you can attack him physically in the chest - when only his hands and head phase out of the ground, look out for his Hand Crush move, that knocks out a character at contact and can kill them in few seconds. He uses Dark Force, Evil Gate, Thunderbolt, Freeze, Energy Absorb and Earth Slide at level 8, and casts them often, so beware. Dark Force would be his most dangerous spell due to doing the most damage.

Popoi can use any elemental spell he wants (except for Shade), Purim's Lucent Beam spell is your primary choice of weapon here. Have her repeatedly cast Lucent Beam (along with Popoi's Burst spell, if you want) to cause major damage. Randi should use full level 8 power attacks on the boss. Keep attacking and eventually you will defeat him without major trouble. Do not attack him with Shadow, lest you heal him. If he uses Hand Crush, he becomes immune to weapons, but can be harmed by spells when his head pops out. (In the remake, Hand Crush is far less lethal, and you can strike with weapons when his head pops out.)

In Greek, Θάνατος (thanatos) means death. In ancient mythology, a being named Thanatos is the personification of death and mortality, and is the son of Nyx (night) and Erebos (darkness). Among his children are Geras (Old Age), Oizys (Suffering), Moros (Doom), Apate (Deception), Momos (Blame), Eris (Strife), Nemesis (Retribution) and even the Stygian Boatman Charon.

Thanatos' nature may be inspired by the Suel Lich from the Dungeons & Dragons Greyhawk Setting.

Thanatos' sprite from the game 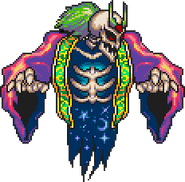 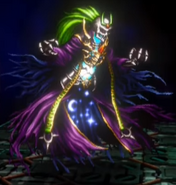 Artwork of the Emperor, his generals and their demonic forms from the remake
Community content is available under CC-BY-SA unless otherwise noted.
Advertisement