Wiki of Mana
Register
Don't have an account?
Sign In
Advertisement
in: Legend of Mana Artifacts, Swords, Secret of Mana Weapons, Trials of Mana

This is about the recurring weapon. For the enhanced remake of the first game in the series, see Sword of Mana (game).

The Sword of Mana (マナの剣 Mana no tsurugi), also simply referred to as the Mana Sword, is a recurring weapon in the Mana series. It is usually the most powerful weapon in the game in which it is featured, and is often wielded by the protagonist to defeat the antagonist in the final battle. The Mana Sword is said to possess the power to counter evil, and has also carried many names over the centuries, including many of the great weapons of myth.

The Hero and Heroine obtain the Rusty Sword, which is eventually revealed to be the Mana Sword. The Sword regains its power in the climax of the confrontation with Julius, but otherwise remains a Key Item for the story. In Final Fantasy Adventure, the Rusty Sword turns into Xcalibur/Excalibur/Mana Sword and is the game's ultimate weapon.

The Sword of Mana originally takes on the form of the Rusty Sword picked up by Randi at the start of his journey. The sword is said to only be able to be wielded by a Hero of the Mana Tribe, but Gemma suggests that the sword's weakened state is what allowed Randi to use the sword, unaware that Randi is the son of the previous Chosen Knight and a woman from the Mana Tribe. With the sword released, the barrier it erected to fend off monsters disappears and Randi is set on a quest to find all the Mana Temples and gain the blessing of the Mana Seeds in order to revive the sword. Eventually Randi and his allies travel to the Pure Land to get the Mana Tree's blessing, but Thanatos destroys the Tree before it can act. Only after defeating the Dark Lich and unsealing the full power of Dryad can Randi finally revive the Mana Sword to slay the Mana Beast. In the closing credits, Randi returns the sword to the place he originally found it, and there it sleeps.

The Mana Sword is unique in this game, as it takes on different forms and attributes based on how many Sword Orbs it has been tempered with.

The Mana Sword is an artifact sought after by the villains as it is the key to reaching the Mana Sanctuary. Defeating each of the Benevodons restores the sword's power. In all three storylines it ends up destroyed, along with the main villain.

Said to be imbued with the will to determine its own destiny, the Sword of Mana functions as an Artifact in this game, and will eventually catalyse the manifestation of the portal that leads to the Tree of Mana in Fa'Diel.

The Sword of Mana is the Holy Sword that fell from the sky in the Mana Tower and has the power to make the Malevodons vulnerable to damage. In Lorimar, one of the chosen heroes will try to use the sword against the Mana Lord, who will reveal the weapon obeys his will and then takes it away.

Dawn of mana is believed to be the birth of the the Mana Sword. At the end of the game Ritzia, the maiden of the mana tree, sacrifice herself together with Faye, the spirit companion of the protagonist. Her sacrifice merged them with the Mana Seed, unleashing mana spirits to the whole world. At the final scene we can see the "Mana Goddess" using the sword to cleanse the world and after that the sword flew from the tree to the ground.

The Sword of Mana is sent to Roget by the Mana Goddess in order to stop the evil behind Esina's Mirror. As such, this is the weapon that allows Roget to deal damage to the Mirage Bishop. After the events of the story play out, the Sword falls within the dimensional rift and returns to the Mana Sanctuary

* - Watts will forge the weapon for 100GP the first time, but normally the cost is 200 for all other weapons.

*** - There are only seven Sword Orbs in the game, but the sword can be tempered again if the player glitches the game to obtain more. 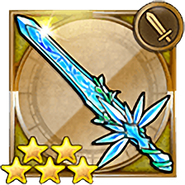 Sword of Mana as shown in Final Fantasy Record Keeper 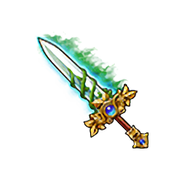