Wiki of Mana
Register
Don't have an account?
Sign In
Advertisement
in: Article stubs, Sword of Mana, Games

This article is about the 2003 video game. For the recurring weapon, see Sword of Mana (weapon).

Many gameplay features from other games in the series appear in Sword of Mana, including the ring menu system from Secret of Mana, the day-night system from Trials of Mana, and weapon forging and the Hot House from Legend of Mana.

Sword of Mana uses a real-time combat and takes place in the regular movement mode. There are different times of day in which only certain monsters appear. Several weapons, such as swords, axes, spears, etc., are acquired throughout the game by defeating certain monsters. Each weapon has an attack trait of either jabbing, bashing, or slashing. These attack traits help to determine damage done to enemies throughout the game. In addition to this, a deathblow gauge is included which, when full, allows a more powerful strike than normal attacks. A magical attack system is included as well, with elements such as light, fire, earth, etc., each affecting enemies in different ways. The form each spell takes and the area it can hit varies depending on what weapon the player has equipped; for instance, the sword produces a spike directly in front of the character, and the bow produces an arc like that of an arrow.

There are nine weapons, each with one of the three attack traits, and with its own unique look. The female character starts out with a rod, and the male character begins with a sword. The player can accumulate more weapons throughout the whole game. There are also seven Elemental Spirits to use. Each has an attack based on its element, and a support spell as well.

Both characters get a variety of sidekicks who accompany them throughout the game. These characters may be used by the player in battle or allowed to run through somewhat-configurable AI, but they can also be manually controlled by pressing the select button but leaving your original character to the AI. These sidekicks are key characters of the story and often contribute significantly to character development.

A young man awakens from a dream of his past to his current life as a gladiator-slave in the city of Granz Realm. Escaping the city alongside his friend and fellow gladiator slave, Willy, the two are confronted by Dark Lord, the ruler of Granz Realm. The boy attacks Dark Lord for the death of his parents, but is easily defeated and thrown from the bridge on which they stand. The boy is fished out of the lake at the bottom of the waterfall by a strange creature named Niccolo who advises him to head for the nearby village of Topple.

Meanwhile, a young woman awakens from a dream of her past in a small lakeside cottage alongside a knight, Bogard. The girl is determined to defeat a dark knight and his magic-wielding cohort for the death of her stepmother and the razing of her home village. Bogard advises her to head to Topple for information while he travels to the city of Wendel.

The girl is the first to reach Topple, where she accepts the request of a young child to find a book he dropped in the village outskirts. While searching she encounters the boy, who helps her find the book and return it to the child. The two decide to team up for the journey to Wendel only to find out that the most direct route, the Marsh Cave, has been sealed by Count Lee who lives at Vinquette Hall. The two travel there to find the Count unavailable, but one of his butlers offers them a room for the night. They meet Isabella, a mysterious woman who has been staying at the Hall for a while and seems to have an interest in Count Lee. The two then retire to their room to rest for a while, but are soon separated and forced to traverse the monster-ridden halls of the manor, eventually reuniting in time to confront Count Lee himself. Following a battle with the count, a ghostly image of Count Lee's friend Granz appears and the two explain the reasons for the kidnapping of Mana women: to protect them from Dark Lord and Julius, his right-hand man. The Count then agrees to unseal the entrance to the Marsh Cave and wishes the two well on their journey.

Eventually, the two reach Wendel where, after meeting with a traveling bard named Lester and a mysterious silver-haired man, Devius, they head for the local cathedral to meet with Bogard and Cibba, a revered sage who assisted the Gemma Knights in defeating Vandole twenty years prior. When the boy tells Cibba and Bogard about wanting the find the legendary Sword of Mana in order to avenge the death of his parents, they laugh at the notion of the blade being used for such a selfish reason. The boy, however, sees it as a personal insult and leaves the building upset, only to find that Dark Lord and Julius have arrived to take the girl. The boy attempts to defend her, but it easily defeated again by the knight. In order to stop more people from suffering at the hands of Dark Lord, she agrees to go quietly.

Dark Lord and Julius take the girl captive aboard an airship, and fly west from Wendel back to Castle Granz. The girl is kept in a private room and attended to by Marley, Dark Lord's maid. Marley and the girl converse, and Marley shares with her what she knows of Dark Lord's past. When Marley leaves the room, Bogard sneaks in disguised as a guard and breaks her out.

The boy follows the airship on foot, and bumps into the dwarf Watts on the way. After making a brief detour to help Watts with his own quest in abandoned mine, the boy catches up to the airship, which had docked near a lake. Aboard the airship, he attempts to save the girl, but is blown off the side of the ship in a tense encounter with Julius. He falls and lands unconscious on the outskirts of Menos, but is found by Amanda, who nurses him back to health. The girl and Bogard, meanwhile, destroy the guardian of the ship's control room, forcing it to land near Menos.

The game's music was composed by Kenji Ito, building on his previous score for Seiken Densetsu: Final Fantasy Gaiden. Some of the 47 tracks were reworked versions of the previous game's songs, while others were entirely new. The soundtrack, Shinyaku Seiken Densetsu: Sword of Mana Premium Soundtrack, was released on August 27, 2003. The first edition included a bonus disc containing a single track. 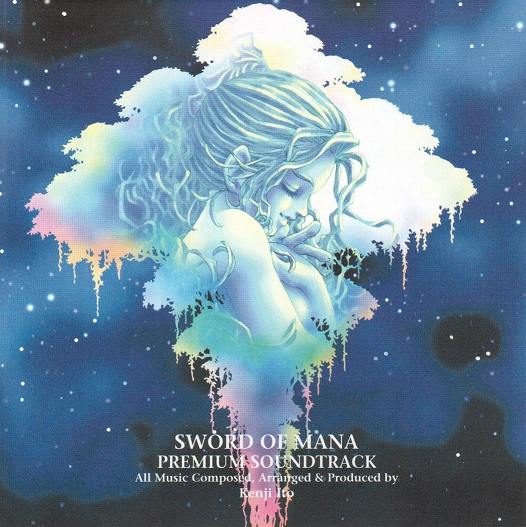 In Japan, a special edition "Mana Blue"-coloured Game Boy Advance SP was released, packaged with Sword of Mana and a carrying case. Those who purchased the game's soundtrack and strategy guide between August 27 and September 30, 2003 were given the opportunity to win a Cactus character cushion and a cellphone strap.

The Emergence of Excalibur