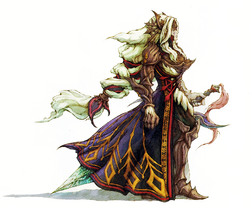 Too high to count

Stroud, the Evil King of Lorimar. He craves power, and thus seeks to open the door to Mavolia, which would unleash dark spirits called The Echoes on the world. Anyone touched by Thanatos servants of the Echoes becomes a kind of monster called a Grimslie, and usually never go back to their true form - or if they do, it's just before they die.

Stroud knows this (though probably never expected anyone to challenge him after he thought he got rid of Keldy), but seeks to use The Echoes' power to become stronger and control Illusia, then the whole of Fa'Diel.

Stroud has a marking on the right side of his face - a gray sword-like shape with a wing coming out of it - that apparently only royals of his bloodline (or of Lorimar) have, and later on we find out someone shares the mark with him.

Stroud became king of Lorimar, Land of Ice, at a very young age. His attempt at fratricide on his little brother by throwing him - then a baby - into the sea failed, though he did not know this until he invaded Illusia and met Keldric.

Players meet Stroud early on when he invades the Isle of Illusia, looking for the Door to Mavolia, not the Guardian Beast like Keldy and Ritzia originally thought.

He eventually attempts to open the Mana Gate to Mavolia yet dies before the Echoes could be fully released though not before "killing" the previous Archdemon Anise and attaining her position and gaining a new form. His body vanishes upon death and ends up in the possession of Bigieu who attempts to resurrect him as the Dark Prince. If Hawk or Riez is the main character, then Bigieu and Jagan kill the Dragon Emperor and the Masked Mage, then after Hawk or Riez gains the Sword of Mana, the two demons kidnap Faerie and trade her for the sword, then they release the God Beasts. Off-screen, the Sword of Mana is used to allow the Dark Prince to resurrect his body in Fa'Diel, who watches the events unfold for his base the Dark Castle. After the God Beasts are killed, the heroes break into the Dark Castle, kill Jagan and Bigieu, and meet the Dark Prince. He absorbs the Sword of Mana and the power of the God Beasts, and offers the heroes a chance to serve him, which they predictably decline with Riez demanding her brother Elliot back with him refusing to give up the unconscious child. The Dark Prince prepares to kill them, but finds that the Goddess is restraining his power, and so he goes to the Mana Holyland to destroy the Tree of Mana to kill the Goddess. The heroes follow him, but he gets to the tree first and destroys it. Faerie attacks him, but he swats her away easily, turns into his true Archdemon form and devastates the heroes. They are, however, healed by Faerie, who tells the Archdemon that even if Mana fades away, as long as they have hope they will create a new world without it. The Archdemon scoffs hope as a "petty emotion" and the final battle begins. After a long fight, he's killed..

The first time the player fights Stroud, it's a matter of staying away from his sword attacks and stunning him long enough to get good hits in. The blue orbs, barrels, and boxes on the ship can help with this. The blue orbs freeze and stun Stroud longer than the barrels and boxes do. Stocking up on Gnome tokens helps; if the player shoots them at the blue orbs, boxes, and barrels, Stroud may be drawn into them and stunned.

The second time the player faces Stroud he's in his Grimslie form and is much harder to fight than the first time. The thing to do is stun him any time you can by throwing things at him or experimenting with Spirit Tokens to see which ones work (Gnome, Luna, Undine, and Salamander have the best chance of working). Aside from that, do whatever works, and use anything around to throw at Stroud, including crystals, pillars, and Spirit Tokens. Once he's stunned, use Faye's Full Tilt spell and go for it. Healing items are in the pillars, or scattered around the battlefield.

The third time you have to have a mix of fighting Stroud and destroying the large flower pillars that are up on the platforms. You go up the stairs until you're across from the pink crystal flowers and jump onto them. Only attack a flower that is glowing. After you destroy the flower pillar, Stroud will become stunned, and you have to quickly jump down and attack him. If there is anything around, throw it at him to stun him further, then use Full Tilt or any other helpful spells of Faye's (Ice Blade, Fire Blade) if you have enough magic.

"Where have you been? This very island IS the door to Mavolia!" -Stroud to Leks, Illusia's Village Guard

"That brat with the weed on his arm...he's one of the Tree Folk, isn't he?" -Stroud about Keldy after they briefly fight each other

Retrieved from "https://mana.fandom.com/wiki/Stroud?oldid=19838"
Community content is available under CC-BY-SA unless otherwise noted.