v · e · d
Sheex (シーク Shīku) is an antagonist in Secret of Mana. He wears purple and leads the generals who serve under Emperor Vandole. He is a Dark Knight with vicious, bloodthirsty and vengeful tendencies. Not much is known about his background except that, like Emperor Vandole, he wants to get his hands on the Mana Fortress.

Randi, Primm and Popoi first meet him in Tasnica, where he kidnapped and impersonated the Chancellor to topple the country from the inside and get rid of the Empire's major obstacle towards world domination. The party foil his schemes and he attacks them under the shape of the Dark Stalker, but he is swiftly defeated. Still, his identity is not revealed until the next meeting.

When the party meets the Emperor and his vassals at Tree Palace, he prepares to get rid of them but Sheex steps in, craving revenge for his foiled scheme in Tasnica, revealing that he was the Dark Stalker. He reveals his true form: the fearsome monster Aegagropilon (Mega Xorn in the original Japanese) and reveals he and his compatriots gained power from the Underworld Mavolia (explaining why he's stronger than other Xorn) before attacking the party, only to get killed for good. 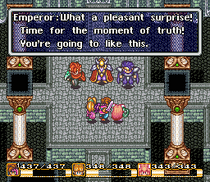 Sheex's sprite from the game 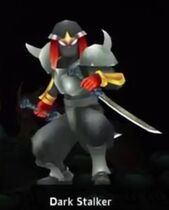 The Dark Stalker in the remake

Artwork of Sheex from a Japanese strategy guide 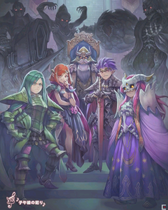 Artwork of the Emperor, his generals and their demonic forms from the remake
Add a photo to this gallery
Retrieved from "https://mana.fandom.com/wiki/Sheex?oldid=29662"
Community content is available under CC-BY-SA unless otherwise noted.