Satoshi Taki
Unknown (SOM; Non-canon)
v · e · d
Shade (シェイド Sheido) is the Mana Spirit of Shadow. He appears as a bat-like creature with a tail, a single eye, and a glowing crystal floating above him. Shade's powers include such things as waves of shadow, orbs of darkness, instant-death, and the ability to dispel any status-modifying spells.

While the Dark Elemental can lend his powers to evil purposes, his willingness to give his powers to the forces of good (the main characters), including his nefarious Evil Gate spell, does not necessarily make Shade evil; rather, he should be considered the "black sheep" of the Mana Spirits. Still, Shade tends to distance away from other spirits and likes to test the abilities of others. Unlike Wisp, he is more serious and inclined.to neutrality.

The last spirit found in the game whose primary power is silhouette and a dark damage that may cause darkness. It will be obtained after Lich is defeated at the Sealed Cave which later helped unsealing the ruined passage together with Wisp.

Another Shade may be obtained/upgraded by: 3 Dudbear gold by a woman named Asaad at Ishe Inn; trading a dark geode found on Menos Outskirts to Gazu of Lohimar; rescuing one trapped in Sealed Cave from a black Dudbear (shade level must be at least 30); praying to the Gray goddess statue at Ishe Inn(shade must have at least 2 upgrade); finding one in the Wendel Cathedral on a Holy Day <Night>(must have done the upgrades stated before this); trading 10 Dark Coins to Frolan of Khala Peaks(shade must done at least 3 upgrades); and lastly blessing it on Wendel Cathedral on Holy Day(done at the last)

Upon obtaining all shades you achieve the title Dark Shaman(ess). 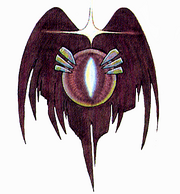 "I, Shade, will test you!"
—Shade pre-battle quote

Shade is found in the Palace of Darkness, guarded by the Lime Slime. He only lends Popoi his power and his spells are Dark Force, Evil Gate, and Dispel Magic. A similar event happens like this when only Primm gets Lumina's spells and not Popoi.

In the HD remake (Non-canonical), he reveals that he was (possibly as a result of his "sinister plans" mentioned in Dawn of Mana) King of Mavolia before someone (possibly his successor) sealed him in the Palace of Darkness, presumably resulting in the rise of a new Archdemon/King of Mavolia to replace him. His design is based on Heroes of Mana.

"You have released my wandering soul. I would be honored to lend you my power and free your cursed compatriot."
—Shade

Shade is the fourth Mana Spirit to join the heroes. Unlike the other seven spirits, Shade is not found near his Mana Stone, as it had been lost in a war in the distant past. Instead, Shade is found trapped on the Ghost Ship, which the heroes inadvertently board while attempting to return to Beiser. Once they have defeated the boss of the ship, Gova, Shade is freed and joins the heroes on their quest.

In the world of Fa'Diel, Shade is regarded as the Spirit of Darkness, and is responsible for casting darkness on the world.

It of interesting note, that Shade likely comes to gain his striped colors in later installments from the Shadoles from Legend of Mana, the embodiment of the shadows of the living and spirits who reside in the Underworld. 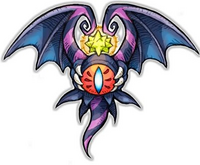 Like his fellow spirits, Shade can accompany the player character on their treks through Fa'Diel's myriad dungeons. His attack and support spells, respectively, are as follows: 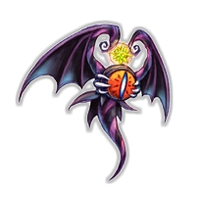 Shade is the only Spirit to not join upon discovery of the respective Mana Stone, since his stone has long been lost and he himself went into hiding. He joins the party near the water border to Pedda, after the battle with Elena. His personality is serious and a bit gloomy; he mourns having lost what he was meant to guard. His spells are Dark Force (for Belgar), Evil Gate (for Valda, Yurcheal and D'Kelli) and Dark Saber (for everyone else).

In Dawn of Mana, Shade seems to hold himself somewhat aloof from the other spirits during Gnome's story. He has a Romanian or Dracula-inspired accent. He acts in a theatrical manner, often playing up his dark theme by talking about "sinister" plans. His elemental powers can induce poison.

Retrieved from "https://mana.fandom.com/wiki/Shade?oldid=39296"
Community content is available under CC-BY-SA unless otherwise noted.