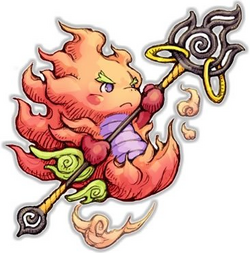 Salamander (サラマンダー Saramandā), also known as Salamando, is the Mana Spirit of Fire. He appears as a fiery reptilian creature wielding a spear. Salamander's powers are perhaps the most destructive, sporting attacks like rains of magma, explosions, fireballs, walls of flame, and a weapon enchantment that burns opponents. Despite his reign of destruction, the Fire Elemental has only one beneficial spell in both Seiken Densetsu 3 and Sword of Mana which temporarily boosts the target's attack power.

Salamander is very hot-headed, thus his element and enthusiastic. He seems to harbor a bit of dislike for Gnome.

Salamander is found in Vinquette Hall, trapped in a furnace blocked by a Jab-type Metaball. He is the first spirit to join Hero, and the second to join Heroine (Wisp being her first). He has a Power-Up support magic.

Another Salamander may be obtained/upgraded by: 3 Dudbear gold by a woman named Asaad at Ishe Inn on a Salamander day<Night>; trading a fire geode found on Subsea Volcano to Gazu of Lohimar; rescuing one trapped in Subsea Volcano from a black Dudbear (salamander level must be at least 30); praying to the Gray goddess statue on the path to Gaia, day/evening(salamander must have at least 2 uprade); finding one on Vinquette hall on a Salamander day(must have 10 fire coins and at least 4 salamanders); trading 10 Fire Coins to Frolan of Khala Peaks(salamander must done at least 3 upgrades); and lastly blessing it on Wendel Cathedral on Salamander Day<Night>(done at the last)

Upon obtaining all salamaders you achieve the title Magus. 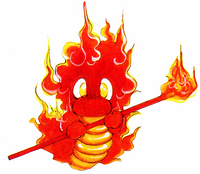 Salamando was stolen away from Kakkara Village by the Scorpion Army and used to heat a small resort town in the Ice Country. When Randi and his friends released him from his prison, Salamando joined them and bestowed his magic on Primm and Popoi. His spells include Flame Saber, Fire Bouquet, and Blaze Wall for Primm, and Fireball, Lava Wave, and Exploder for Popoi.

Salamander is the sixth Mana Spirit to join the heroes. He resides in the Valley of Flames past the Desert of Scorching Heat. As the heroes approach the Valley of Flames, they encounter resistance in the form of Nevarl's forces, including Bill and Ben, two powerful ninjas. Once in the Valley, the heroes find Bigieu, who is attempting to release the Fire Mana Stone's energy by sacrificing Hawkeye's friend Jessica. Fortunately, Hawkeye (or his feline friend Nikita if Hawkeye is among the heroes) is able to rescue Jessica, forcing Bigieu to sacrifice Bill and Ben instead. Her task complete, Bigieu leaves. After she's gone, Salamander appears and joins the heroes on their quest. 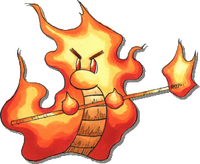 In the world of Fa'Diel, Salamander is regarded as the Spirit of Fire, who is "able to manipulate scorching flame." 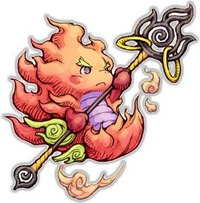 Like his fellow spirits, Salamander can accompany the player character on their treks through Fa'Diel's myriad dungeons. His attack and support spells, respectively, are as follows: 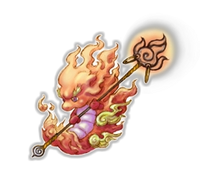 His spells are Explode (for Valda), Fireball (for Belgar, Yurcheal and D'Kelli) and Flame Saber (for everyone else).

In Dawn of Mana, Salamander is hot-tempered and usually wants to act before thinking. He is skeptical of Gnome's story, and it is hinted that he is just plain belligerent towards Gnome in general. His elemental power involves burning enemies.

In the Classic age, salamanders were thought to be lizards born from fires. Today it is known that they are amphibians, like frogs and toads.

Retrieved from "https://mana.fandom.com/wiki/Salamander?oldid=19334"
Community content is available under CC-BY-SA unless otherwise noted.