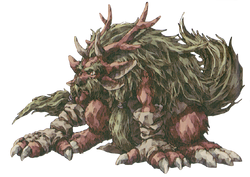 Official artwork of Rosiotti from Legend of Mana.

Rosiotti (ロシオッティ Roshiotti) is a character from Legend of Mana. One of Seven Wisdoms existing in the world of Fa'Diel, Rosiotti, once revered as a hero, quietly resides in the Jungle as the guardian of the creatures inhabiting it.

Rosiotti later reappears in Sword of Mana as the fourth Wisdom that can be acquired by players. He functions as the wisdom of Plants/Wood in this game.

Although a master tactician and a skilled archer in ages past, during the events of Legend of Mana, it is evident that much of Rosiotti's vigor has escaped him, as his life of retirement sees him assuming a personality that is markedly mellow and placid. His actions both in Huntin' Du'Cate and The Murmuring Forest prove as much; in spite of the fact that the peace of the Jungle that he oversees is disturbed on both occasions, he elects to play a rather passive role, steering clear from directly participating in the effort to quell the disruptions. The latter quest even sees him eventually falling asleep by the time it concludes, further emphasising on the imperturbability he has thus far displayed.

Rosiotti's magic being harnessed in Sword of Mana.
Add a photo to this gallery
Retrieved from "https://mana.fandom.com/wiki/Rosiotti?oldid=11994"
Community content is available under CC-BY-SA unless otherwise noted.