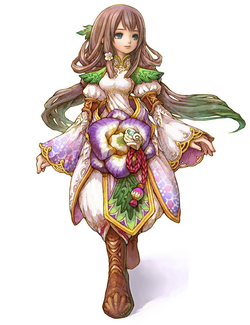 A Tree Maiden on Illusia, Ritzia included, seems to be ceremonial but they usually have a deep connection with nature. This is especially true of Ritzia, when she scolds Keldy for carving their initials on a tree, and even more when the soldiers of Stroud come to Illusia and start destroying it.

Ritzia is a friend of Keldy's and has been through her childhood. Keldy's full name is Keldric, but it seems that Ritzia gave him the nickname of Keldy, and his friends (Leks, or Lekius) call him Keldy too. She may have some feelings for Keldy, and vice versa, but mostly they are really good friends. She is a Tree Maiden, and is very in tune with the nature on Illusia. When Ritzia found a tree that Keldy had carved their initials into, she remembered that day fondly, but scolded Keldy for hurting the tree and told him that "When we hurt a living thing, we hurt ourselves." She also has a pet Rabite (normally a wild creature) she calls Buju.

When she thought Keldy was dead (seemingly killed by Stroud, but he was saved by the child sprite, Faye) she became very depressed, and soon thereafter opened the door to Mavolia, apparently not caring what happened to the island at that point because the most important person to her was gone.

Ritzia's role as Tree Maiden was ceremonial, but she has a great attunement to nature, and ends up having true power as the Goddess.

She sacrifices herself early on so that Keldy can escape and ask the Guardian Beast to help them, and for most of the story afterward, she is held captive by Stroud - though Keldy heads out to rescue her after he finds the Guardian Beast.

Ritzia, after opening the door to Mavolia, merged with the spirit of a woman named Anise. When Keldy fights her, she is in a Medusa-like form, and Keldy has to defeat her by repeatedly destroying the two snakes that protect her, and then fighting her directly until her health is completely gone.

"Don't be too rough on him though!...You're going to need a leash, Buju!" - Ritzia, talking to Keldy about getting her runaway pet Rabite back, and then talking to Buju about not running away.

"You really have no idea why he (Leks) gets angry with you, do you?" - Ritzia to Keldy, when he's saying his friend Leks will get mad that he took a Tree Maiden outside of the village.

"Since time immemorial, The Great Tree has stood dormant. If only it could flourish again."

"Oh, no...throw it away!" -(When Keldy picks up the Great Tree's seed and it begins to implant in his arm.)

"The Maiden....a thousand years...voices....Echoes....Keldy, am I really me?" -Ritzia, under control of the Echoes, onboard Stroud's ship after Keldy and Faye find her imprisoned in the hold.

Ritzia is voiced by Laura Bailey in the English version, but she is not credited for it. 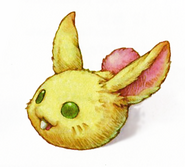 Ritzia's Rabite Buju
Add a photo to this gallery
Retrieved from "https://mana.fandom.com/wiki/Ritzia?oldid=18673"
Community content is available under CC-BY-SA unless otherwise noted.