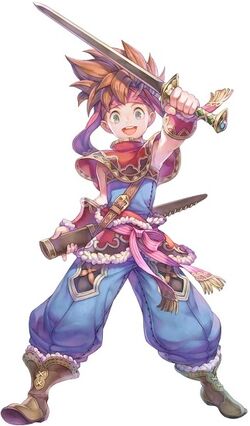 Kenshō Ono
v · e · d
Randi (ランディ Randi) is the main protagonist in Secret of Mana. He was adopted by the Elder of Potos Village after his mother had disappeared. He is the son of Serin and a woman from the Mana Clan and his successor as the Mana Knight, chosen wielder of the Mana Sword. He is 16 years old, 5 ft. 7 tall, and weighs 137 lbs.

The story begins when Randi and his friends Elliott and Timothy are looking for treasure at the waterfall near the village. The game starts when the three are on a log above the waterfall. However, Randi suddenly slips and falls into the river below.

He is beckoned by a mysterious voice and soon finds a rusty sword embedded in a rock; as he pulls it out, the sword flashes brightly and the voice reveals itself as the ghost of a knight who had summoned Randi. As the ghost disappears, Randi raises the sword up and another blast of light bursts forth from it, seen from miles away. On his way back to the village, Randi is surprised to find the path full of Rabites.

Upon arriving home, he finds out the village has come under attack from a wave of monsters while he has been gone. In the cafe, he meets Gemma, a stranger who gives a discerning look at Randi, before he goes to see the Elder of Potos. The Elder learns at once that Randi had pulled out the Mana Sword, which had been protecting the village from danger for years, resulting in the recent monster activity.

Elliot angrily lashes out at Randi, shoving him out to the center of the village and blaming him for the village's misfortune, but the fight is interrupted by a sudden earthquake and a fissure opens up beneath both boys. They land underground where Randi uses the Mana Sword to defeat a large Mantis Ant. As Elliot cowers and hides, Gemma coaches Randi from above. After the battle, Gemma advises Randi to go to the Water Palace to talk to the sage Luka.

Randi is then summoned by the Elder to a village meeting where they unanimously vote that he be banished from Potos Village as the nearby monsters will be attracted to his sword. Before leaving the village, the Elder tells Randi that his mother disappeared shortly after leaving him there as a baby and regrets seeing him go this way. With nowhere else to go, Randi makes his way to the Water Palace where Luka reveals that the Mana Sword has retained only a fraction of its former power and Randi must renew it in order to restore peace to his world. On his journey, Randi is joined by Primm, a hot-headed girl who wants to rescue a friend from the clutches of an evil witch; and Popoi, an energetic sprite child trying to regain his memory.

Randi and his newfound friends set out to destroy the evil Vandole Empire, and confront Vandole's four wretched generals, including the mysterious sorcerer Thanatos, who captured Primm's boyfriend Dyluck and works from the shadows for mysterious purposes. They learn that the Emperor and his generals made a pact with Mavolia to gain dark powers, and control the monsters to break the seal of the eight Mana Seeds to unseal the Mana Fortress, which would enable them to take over Fa'Diel.

Randi's party defeats the witch Elinee, who is in fact merely Thanatos' mind slave, and later confront the sorcerer in the Pandora Ruins, destroying the Wall Face and saving the citizens of Pandora, Gemma included. They later save Undine and gain her power, before saving Gnome and gaining his powers as well. They retake the stolen Mana Seed of Water from the Scorpion Army, but cannot prevent Geshtar from breaking its seal.

The party returns to the Upper Land, home-country of the Sprites, gaining Sylphid's powers from Popoi's grandfather, but the Sprites were destroyed by monsters. They meet King Truffle of Matango and rescue a young White Dragon that King Truffle names Flammie. They venture in Kakkara Desert, where they are rescued by soldiers of the Old Republic on a Sand Ship, which is attacked by Geshtar, whom they defeat on his Mech Rider. They later venture into the North, saving Salamando from the Scorpio Army and gaining his powers, before retrieving the Mana Seed of Fire from Frost Gigas, who turns out to be a cursed Santa Claus.

After gaining Shade's powers and saving Lumina from the greedy King Mammon, gaining her powers as well, the party confronts Thanatos in the Northern Ruins, and later meets the Resistance and its leader Krissie. The Emperor fakes parlays to trap the Resistance in the jails of the Imperial Castle, but Randi and his friends escape and confront the vile monarch, only to get locked in a rematch against Geshtar's second Mech Rider. Geshtar destroys the castle to take them down with him, but they are saved at the last minute by King Truffle and Flammie, who they use to travel all over the world.

Later, they save the King of Tasnica from the Dark Stalker (actually Sheex in disguise), who was impersonating him to topple the Kingdom from the inside. Gemma then redirects them to Sage Joch, so as to conquer their inner darkness and prove truly worthy of their title of heroes. They eventually gain Luna's power, but their time is running short.

They finally go to the Tree Palace and gain Dryad's power, but Thanatos has sealed her Mana Magic to prevent them from using it against the Empire. Upon venturing into the Grand Palace, they stumble upon the Emperor, Sheex and Fanha, who break the seal of the Mana Seeds and raise the Underground Palace from below the sea. Sheex turns into Aegagropilon to get his revenge, but the party destroys him.

It is then revealed that Thanatos manipulated the Emperor to enact his goal, using him to divert attention. Thanatos and his accomplice Fanha kill the now useless Emperor and set out to unseal the Mana Fortress, but the party kills Fanha's immensely powerful demonic alter-ego Hexas, and later the Grim Golem Mech Rider.

The party rushes to the Pure Land to get the Mana Tree to restore the Mana Sword, but Thanatos has been waiting for them, and he uses the Mana Fortress to destroy the tree before their very eyes. The dying Mana Tree then reveals that Randi is from the fabled Mana Clan, that The Emperor and Thanatos killed his father Serin fifteen years before the start of the story, and that after she died, his mother became one with the Tree. With her last strength, the Tree restores the Mana Seeds, enabling the party to storm the Mana Fortress and settle their score with Thanatos once and for all.

They confront Thanatos, whose current human vessel is decaying. The sorcerer reveals that he plans to use Dyluck as the perfect host to rule the world for eternity, and even Primm dealing him a lethal wound cannot prevent him from transferring his mind to Dyluck's body, forcing Dyluck to sacrifice his life before it is too late. Thanatos attacks the party under his true, spiritual form of the Dark Lich, only to get destroyed for good in his turn. His death unseals the Mana Magic, but unfortunately the Mana Beast has risen, forcing the reluctant Randi to destroy it.

The Vandole Empire, the Mana Fortress, and the Dark Lich are destroyed for good, but the death of the Mana Beast means that the Mana Power has left the world until the Mana Tree can regrow again, meaning that no creature born from it can survive anymore, including Popoi and Flammie. Grieving, Randi returns Primm to Pandora and replaces the Mana Sword near the Potos Waterfall, departing to help with the restoration of the world.

Randi's default weapon is the sword. He is the most physically proficient member of the group, having the highest attack, defense and HP. As he has no magical ability whatsoever, this is counterbalanced by his weapon skill learning rate, in which he masters every weapon's special attacks the fastest of the trio.

Randi's sprite from the game

Randi's 3D render in Rise of Mana.
Add a photo to this gallery

Randi's art in the iOS port

Randi card from Circle of Mana.

Randi from the American Commercial
Add a photo to this gallery
Retrieved from "https://mana.fandom.com/wiki/Randi?oldid=20315"
Community content is available under CC-BY-SA unless otherwise noted.