Rabites, known as Rabi (ラビ) in the Japanese versions of the games, are cute, fictional, rabbit-like creatures appearing as a common enemy in the series since its beginning. The Rabite has become a sort of mascot for the Mana series. The Rabite resembles a limbless, one-toothed rabbit with large ears that curve upward and form a point at the tip and a round, puffy pink tail. Rabites move by hopping along the ground. They are most commonly yellow colored, but there are also variants of different colors, such as pink, lilac, black, green, and white. Rabites are most commonly simply minor enemies, but some variants are "superboss" characters and even friendly units and pets.

Rabites are among the first monsters encountered in the game by both Hero and Heroine, bounding about the Topple Outskirts. 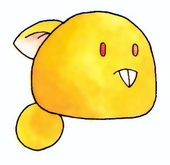 Rabites are the first enemies spawned after the removal of the rusted Sword of Mana from the base of the waterfall near Potos. After coming across one while making his way back to the village, Randi remarks how unusual it is to see one, particularly so close to Potos. They can also be spawned by Eggplant Men, an enemy found considerably later in the game.

Rabites are some of the first enemies encountered in the game and are encountered in the Rabite Forest south of the Castle City Jadd. Stronger variants can be found in later areas like the Mana Holyland and the Jungle of Illusion.

Ritzia has a pet rabite named Buju that often likes to bound around the fields and forests of Illusia Isle. Wild rabites are also encountered as enemies early on in the game.

Rabites are encountered early on in the game, and a tame rabite hatches from the first monster egg the Hero/Heroine obtains, unless the player has a Final Fantasy VIII save file on the same Memory Card as their Legend of Mana file, in which case it will hatch a Chocobo.

Rabites are among the first enemies encountered in the game, infesting the first few floors of the Mana Tower.

Rabites appear in Heroes of Mana as a gatherer unit. They are the first gatherer unit available as well as the first unit summoned in the game. They are used to harvest Treant Berries in the tutorial mission.

Rabites are also mentioned in Final Fantasy X-2 with an accessory comically named "Rabite's Foot" which increases a character's luck statistic. Final Fantasy Tactics Advance also mentions Rabites, where they are listed in the description of one of the game's optional missions as an endangered species due to being poached for good luck charms.

One of the first accessories available in Secret of Mana is the Rabite Cap, presumably made from a skinned Rabite. Donning it gives the wearer an extra +5 protection level.

Retrieved from "https://mana.fandom.com/wiki/Rabite?oldid=19895"
Community content is available under CC-BY-SA unless otherwise noted.