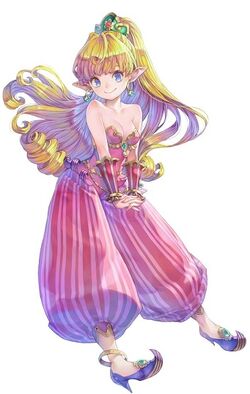 Nozomi Yamamoto (Remake)
v · e · d
Primm or Purim (プリム Purimu) is one of the playable characters in Secret of Mana and comes from the kingdom of Pandora. She is 17 years old, 5 ft. 4 in. tall, and weighs 104 lbs.

Primm meets Randi briefly when he is ambushed by Goblins and saves him from being eaten. After they escape, she admits that she mistook him for someone else and disappears, only to appear again soon afterward. The location in which she reappears varies depending on the player's actions, but she is necessary to complete the Witch's Castle. She joins the party in either Pandora (after a scene where she fights with her father Elman) or the Haunted Forest (after the player rescues her from two monsters).

Primm is in love with a Pandorian warrior named Dyluck who was ordered by the King of Pandora to apprehend the powerful witch Elinee. Angry with the King for sending her lover on a suicide mission and furious with her father for setting her up an arranged marriage, she rebels, leaves the castle, and joins Randi on his quest, hoping to save Dyluck.

Primm's default weapon is the glove. She is a typical support character, casting mainly defensive and healing spells while her combat ability ranks about average. She has the most balanced stats of the three characters, being more durable than the Sprite but not as physically powerful as the Boy. Her magic is largely defensive and healing in nature with the exceptions of Salamando and Lumina, who feature offensive magic.

It is possible to bypass the Goblin attack event and not meet Primm until the player arrives at Pandora. There, the scene at the castle will play out differently as Primm will push Randi aside and the player can meet Primm in her house.

Purim's sprite from the game

Primm's 3D render in Rise of Mana.
Add a photo to this gallery

Primm's art in the iOS port

Primm card from Circle of Mana.

Primm in Merc Storia
Add a photo to this gallery

Retrieved from "https://mana.fandom.com/wiki/Primm?oldid=20257"
Community content is available under CC-BY-SA unless otherwise noted.