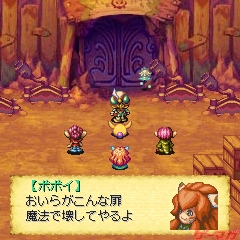 Mariko Mizuno, Emiri Katō (Remake)
v · e · d
Popoi (ポポイ Popoi) is a playable character from Secret of Mana. A Sprite from the world of Secret of Mana, they are mischievous and boastful, but caring. Popoi's age and gender are unknown, but they are 3 ft. 1 in. tall and weigh 71 lbs.

Randi first meets Popoi at the Dwarf Village, where they are found to be collaborating with the Dwarf Elder to scam people for money at the latter's freak show. Due to a massive flood in the Upper Land that washed them away into Gaia's Navel, Popoi has memory loss and doesn't remember anything about their past. At the Dwarf Elder's suggestion, Popoi joins Randi in hopes of recovering their memories, eventually reuniting with their grandfather in the Wind Palace, but deciding to continue aiding Randi in his quest. Popoi is the most mischievous member of the group and often plays the role of comic relief. As an orphan, they understand how Randi feels growing up without parents. In the Mana Fortress, the party realizes that destroying the Mana Beast will end Mana and wipe out all of the beings connected to the world by it, including Popoi. Popoi cheers them on to save the world instead. In the game's ending Popoi fades away along with Mana, the final screenshot of the game showing their spirit watching over the world.

Popoi's default weapon is the boomerang, also joining with a bow, and their specialty in battle is attacking magic, which delivers devastating amounts of damage from a safe distance. This is especially important because Popoi is the exact opposite of Randi in terms of parameters: Popoi's attack, defense and HP are the lowest of the team, and they learn special attacks with weapons very slowly.

Popoi's sprite from the game

Popoi's 3D render in Rise of Mana.
Add a photo to this gallery

With Randi and Primm

Popoi's art for the iOS Port

Popoi in Merc Storia
Add a photo to this gallery

Retrieved from "https://mana.fandom.com/wiki/Popoi?oldid=20254"
Community content is available under CC-BY-SA unless otherwise noted.