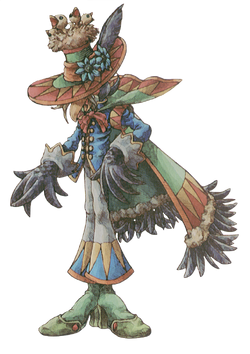 Official artwork of Pokiehl from Legend of Mana.

The Storyteller
Poet of Truth
Messenger of the Cosmic Truth

Pokiehl (ポキール Pokīru) is a character from Legend of Mana. One of Seven Wisdoms existing in the world of Fa'Diel, Pokiehl is also known as the Poet of Truth. He is revered as a hero of ages past, where he was known as the "Messenger of the Cosmic Truth".

Pokiehl reappears in Sword of Mana as the second wisdom that can be acquired by players. He functions as the Wisdom of fire in this game.

Masking the expansive knowledge of the history of Fa'Diel and the caprices of its inhabitants that have earned Pokiehl the title of Wisdom is a personality that is markedly airy and blithe; in just about every situation that he participates in, he is known to translate his acuity into poems, which he then presumably jauntily sings to the tune of a ditty. His actions in the eponymous Pokiehl: Dream Teller quest best illustrates this, as he, prior to guiding the Hero/Heroine through a reenactment of the Ulkan Mines incident, breezily sings a limerick while strutting around an enchanted musical box.

It is through this same limerick that one can glean the sheer extent of his wisdom. While it initially appears to be a spell that allows one to bend the rules of time in order to cross from the future to the past, it simultaneously summarises the saga of the star-crossed lovers; the "birds-of-paradise" in the first line, for one, symbolise the glamorous allure of Irwin's wild freedom that is responsible for piquing Matilda's attraction to him. The "shackles of time" in the second line metonymically represent the constricting binds that Matilda's fate as the direct descendant of Gato's priest lineage have imposed on her, and the concept of "breaking free" from these mirror the temptation that Irwin offers to liberate her.

Pokiehl's magic being harnessed in Sword of Mana.
Add a photo to this gallery
Retrieved from "https://mana.fandom.com/wiki/Pokiehl?oldid=11996"
Community content is available under CC-BY-SA unless otherwise noted.