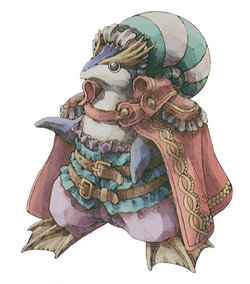 Official artwork of a Pirate Penguin from Legend of Mana.

The term Pirate Penguins (海賊ペンギン Kaizoku pengin) collectively refers to the group of pirates helmed by Cap'n Tusk in Legend of Mana. The Pirate Penguins are known to be extremely proud of the position that they collectively fill as pirates of the sea, although it is said that they hardly, if at all, behave like typical pirates.

Upon entering Madora Beach, the player spots a penguin couple and hears them talk. The pirate penguin David is about to part with Valerie to return to the SS Buccaneer, which is greatly upsetting the female penguin. Valerie mutters about having an egg when David overhears her. She runs off before David realizes that Valerie must have laid an egg before he gives chase to her.

After the player has defeated the Fullmetal Haggar, they see David catching up to Valerie. He said that he'll be together with her instead of being with the pirates. Valerie insists that he should return to the ship instead, but is unable to persuade David until she lies of not having an egg. David finally heads off back to the ship, to Valerie's relief. When the player speaks to her, she'll state to herself that she couldn't live her life with a pirate and she'll hatch the egg herself.

If the player had smashed more than 30 crabs at the end of the eastern side of the beach and talked with the crab, a penguin presumed to be Valerie can be found in the player's Home, thanking them for all they have done.

After sailing for some time, the ship comes to a sudden halt. As the player looks around the ship, they'll find a pirate penguin fishing at the quarter deck and after returning to the area,the penguin has fished out a bottle containing Goya and releases it. The ghost throws the entire ship into chaos. After Cap'n Tusk suggests to find the bottle to seal Goya, the player eventually finds one of the penguins hiding in a barrel and manages to convince the penguin to hand them the bottle by claiming that there's a pretty girl on the boat.

Eventually, the player manages to defeat Goya and it is presumed that it has been sealed back in the bottle and was thrown back in the sea. Cap'n Tusk thanks the player as a "man of the sea", while the penguin nearby will point out about the player's gender if the player is controlling the Heroine.

Filled with overwhelming pride over the fact that they are pirates, the Penguins are unabashed in expressing the unbridled joy and passion that they derive from the occupation of choice. Speaking to any Penguin while on board the SS Buccaneer will yield responses that are very telling of the Penguins' enthusiasm as pirates, singing songs and exclaiming ardently while diligently executing their tasks on deck.

Although they are raucous in declaring their statuses as pirates, the Penguins do not, like their encyclopedia entry states, behave in a manner that is remotely similar to a traditional crew of bloodthirsty, ferocious and anarchic brigands; on the contrary, the Penguins are instead advocates of peace, seeking to steer clear of trouble wherever possible, and prefer indulging in activities that are markedly more relaxed and phlegmatic in nature.

Portrait of David the Pirate Penguin.

Portrait of Valerie, girlfriend of David.
Add a photo to this gallery
Retrieved from "https://mana.fandom.com/wiki/Pirate_Penguins?oldid=18666"
Community content is available under CC-BY-SA unless otherwise noted.