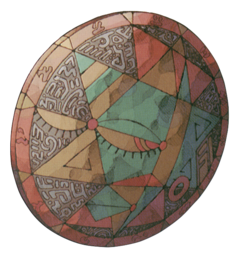 Official artwork of Nunuzac from Legend of Mana.

Nunuzac (ヌヌザック Nunuzakku) is a character from Legend of Mana. Once a conjurer who participated in many wars in ages past, Nunuzac, during the events of Legend of Mana, has evidently retired from his colourful past, choosing instead to function as a professor in Geo's Academy of Magic. Owing to the fact that his flesh body is trapped in a different dimension, he is thus represented by a magic circle in the world of Fa'Diel.

Although revered as a conjurer of some renown during the time of the holy wars, Nunuzac's character is one that seemingly contradicts his credentials; he has been portrayed as an individual who is brusque, insensitive, presumptuous and egocentric.

A fine means of illustrating Nunuzac's rude lack of sensitivity can clearly be observed through his interactions with Esmeralda; in spite of the fact that the fate of her people is dire as they face the risk of extinction, Nunuzac unhesitatingly derides and condemns them, harshly proclaiming that their cores are "worthless" and disparagingly referring to Esmeralda as "dirt".

It is through this same example that some redeeming qualities of Nunuzac may be derived; it is revealed that his mockery of the Jumi race is not out of malice, but rather done as a means to protect Esmeralda from coming under the notice of the enigmatic jewel hunter.

Despite this, Nunuzac's character flaws far outweigh his strengths. In The Cage of Dreams, for one, he impertinently takes matters into his own hands by imprisoning the Sproutling who is to catalyse the Tree of Mana's revival in a different dimension, under the fear that mankind will abuse the tree's power. His adamant refusal to release the Sproutling, alongside his verbal abuse of Pokiehl thereafter, further amplifies this unfavourable aspect of his character, as they point towards an irate obstinacy and an attitude of condescension.

Retrieved from "https://mana.fandom.com/wiki/Nunuzac?oldid=12166"
Community content is available under CC-BY-SA unless otherwise noted.