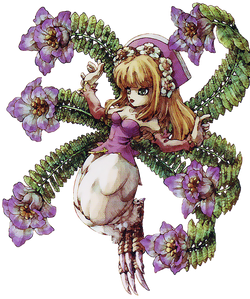 Official artwork of Monique from Legend of Mana.

Monique (リュミヌー Ryuminū, lit. Lumineux) is a character from Legend of Mana. A 21-year-old siren, Monique is the proprietor of Lumina's lamp shop. She is said to sing to the spirits in a bid to coax them into lighting her lamps, thereafter selling the lamps as her primary source of income. Monique is intimately acquainted with fellow siren Elle and the mermaid Flameshe, and is once the lover of Gilbert.

Contrary to appearances, Monique is portrayed as a practical individual, not prone to whimsical flights of fancy. This fact is best illustrated in Faeries' Light, where, in response to Gilbert's romantic, yet unrealistic, vision for her to roam the world of Fa'Diel with him as a fellow wayfarer, Monique declines, choosing instead to continue making a practical living through the craft of lamp-making.

It is through this same decision that Monique is observed to be not just an artisan who takes pride in practising her craft, but also a person who derives happiness from simple, uncomplicated pleasures; the joy that she expresses in response to the Dudbears' outpouring of praise and gratitude for her lamps proves as much.

This practicality of Monique's extends towards other fields; in The Siren's Song, it evolves into a strong sense of conviction and dignity, as she vehemently protests against her fellow siren Elle's decision to enter solitary confinement simply for following the call of her birthright through the act of singing.

Retrieved from "https://mana.fandom.com/wiki/Monique?oldid=12012"
Community content is available under CC-BY-SA unless otherwise noted.