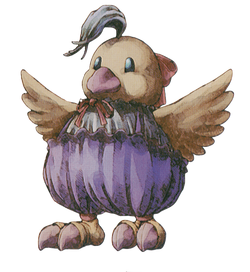 Official artwork of Miss Yuka from Legend of Mana.

Miss Yuka (ユカちゃん Yuka-chan) is a character from Legend of Mana. A 35-year-old anthropomorphic bird, Miss Yuka is the proprietor of Domina's only inn. Although she constantly insists that she is a canary, rumours abound that she is, in actuality, an evolved Chocobo. It is said that it is imperative that one addresses her as "Miss Yuka".

Miss Yuka is portrayed as a matronly character who exudes a maternal air, befitting her occupation as the proprietor of Domina's inn, one that demands her to be meticulous, yet tender and warm, in the treatment of her guests. Her maternal inclinations are especially explicated through Pee-wee Birdie, where she displays an excessive fastidiousness in memorising every last detail of the ingredients necessary to catalyse the hatching of her egg.

Although not explicitly displayed through her behaviour, Miss Yuka is known to be a rather sensitive, insecure character; her encyclopedia summary proves as much, as she is described to take personal offence when anyone claims that she is a Chocobo, vehemently insisting that she is instead a canary.

Retrieved from "https://mana.fandom.com/wiki/Miss_Yuka?oldid=18660"
Community content is available under CC-BY-SA unless otherwise noted.