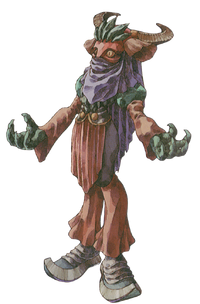 Official artwork of Mephianse from Legend of Mana.

Mephianse (メフィヤーンス Mefiyānsu) is a character from Legend of Mana. 32 years of age, Mephianse is the principal of the Academy of Magic that is located in Geo, commanding magical power whose potency is equivalent to that of two sorcerers combined. Joining him in the superintendence of the Academy of Magic are a small handful of colleagues, including Kathinja, Thesenis and Nunuzac.

In juxtaposition to his grim, sombre and hostile appearance, Mephianse is in possession of a character that is notably benevolent, fun-loving and friendly.

Mephianse's benevolence particularly shines through in Can't Look Back, where he proves to be immensely responsible in ensuring the welfare of the students accompanying him on his trip to the torturous Fieg Snowfields; while searching for clues leading to the discovery of his missing brother, he keeps his students from risking death by insisting that they remain in front of an enchanted fire in a makeshift campsite. Mephianse's generosity is also explicated in Alexandrite, where he permits Pearl to retrieve a key to Diana's heart from his office without questioning her motives.

Mephianse's love for fun is quite phenomenal, as he is known to go to fairly extreme lengths in order to entertain himself. This is best illustrated in Reach for the Stars, where he stages an elaborate prank to dupe Kathinja into believing that he intends on casting a terrible spell from a "forbidden spell book" in Duma Desert, when all he has planned on doing is enact a firework display.

Retrieved from "https://mana.fandom.com/wiki/Mephianse?oldid=12014"
Community content is available under CC-BY-SA unless otherwise noted.