Mara (マリクト Marikuto) is a supporting character in Secret of Mana. She is an old woman who lives in Southtown. She always carries a small box with her and is considered crazy by the locals.

In truth, Mara is a spy from Tasnica. When the party first talks to her, she gives them the passcode that will allow them to enter the Sewers, which they can use to reach Northtown. She helps the party again after they reach Gold City, where one of the residents tells them that the key to Gold Tower was stolen by a Tasnican spy from Southtown. The next time the party talks to Mara, she will tell them that her husband was also a spy who was captured and executed by the Vandole Empire, but gave her the box before he died. It contains the key to Gold Tower, which she entrusts to the party. 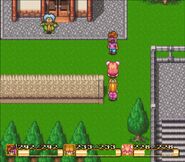 Mara (upper left) outside her house
Add a photo to this gallery
Retrieved from "https://mana.fandom.com/wiki/Mara?oldid=15820"
Community content is available under CC-BY-SA unless otherwise noted.