Mana Village is the name shared between two separate locations in the Mana series, one of which appears in Sword of Mana, the other in Children of Mana, Dawn of Mana and Princess of Mana.

Mana Village is the hometown of both the heroine and Willy, where they spent many happy days amongst the other members of the Mana Clan. Unfortunately, the village was attacked and razed by Dark Lord and his army because of his belief that the Mana Clan were heretics who hoarded the power of mana.

Not much is known about the layout of the village or its location relative to other areas, as it is only seen is sepia-toned flashbacks and dream sequences. The only concrete information available in this regard is that the village is situated near, or surrounded by, woodland. 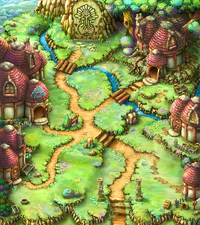 Mana Village is a small settlement on Illusia Isle and the home of the four playable characters. In terms of gameplay, it acts as the central hub location in which the player can purchase new items and equipment and sell their surplus, as well as take on myriad optional quests. Places of Interest are Mayor Moti's house, the Silver Mermaid (similar in function to a mall), an archive holding many books and research on Mana and related fields of research, and what appears to be the Door to Mavolia from Dawn of Mana. It is inhabited mostly by spirits and humans.