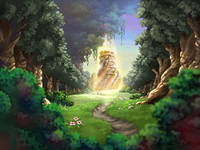 The Mana Tower is an area in Children of Mana. Found on Illusia Isle to the north of Mana Village, it is the first dungeon explored in the game.

Before the events of the game, Tess and the other maidens living in the Mana Village would regularly ascend the Mana Tower to pray to the Mana Goddess. However, one day, the power of Mana around the tower surged, causing a great energy pillar to surround the tower, twisting the space inside and summoning monsters. In an effort to rescue Tess, who is still inside the tower, Ferrik ascends the tower alongside one of the Mana Spirits, slaying the monsters and eventually finding Tess atop the tower. However, before they can leave, they are accosted by a great fiery bird-like beast. Initially unable to harm the creature due to the energy field surrounding it, a great sword falls from the sky and dispels the field.

After defeating the creature, a man wearing dark clothing appears and attempts to take the sword, but is repelled. Muttering something about the plans of the Mana Goddess, he disappears. Ferrik takes the sword and returns to the village together with Tess.

Later in the game the player can revisit the Mana Tower to meet Dolan and Dangaard, as well as several other side quests.

Retrieved from "https://mana.fandom.com/wiki/Mana_Tower?oldid=18369"
Community content is available under CC-BY-SA unless otherwise noted.