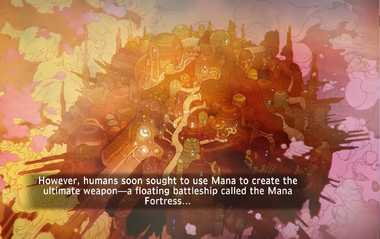 The Mana Fortress (Gigantes in Japanese) is a flying fortress that serves as the final dungeon of Secret of Mana.

Many years before the events of the game, it was used as a superweapon until a hero wielding the Mana Sword smashed it. It is then resurrected and controlled by Thanatos, who then destroys the Mana Tree with it. The Mana Beast rose up to attack it; this would have caused the ruination of the world if Randi and his friends had not attacked the fortress and defeated the Mana Beast.

The Mana Fortress is the only location on the world map that constantly moves, teleporting periodically on the map. To land there, a player must be riding Flammie at a high altitude and approach the Fortress directly before it teleports. It is only accessible once the player has arrived at the Mana Tree and completely revived the Mana Sword; otherwise the characters will land there briefly and state that they cannot progress further.

It is possible to find secret equipment while playing through the Mana Fortress, including armor not sold in any store. It is also possible to find extra weapon orbs in chest drops here, though it is not clear as to whether they were intentionally part of the game.

A different Mana Fortress appears in the hands of the kingdom Altena during Trials of Mana.

Map of the Mana Fortress in the original Secret of Mana