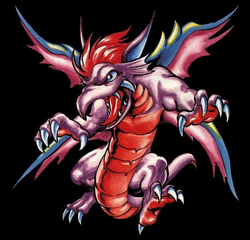 The Mana Beast is the last boss of the game and it only has three basic attacks. First off, Randi is the ONLY person who can seriously damage the beast, so spells will be literally useless. Second, Randi needs to have the Dragon Buster (the level 8 sword) equipped. Third, at the beginning of the fight, use Purim and set up the following spells in this order: level 8 Defender, Lucid Barrier, and Lunar Boost (for extra damage). Then have her switch to Dryad and have her cast level 8 Mana Magic on Randi. As soon as you are done selecting that, switch to Popoi and have him cast level 8 Mana Magic on Randi. If you did this quick enough, both of them should be casting the spell at the same time, and as a result the Sword of Mana will be revived. By this time, the beast should be in the background of the screen, preparing its swirling fire attack. Now have Randi charge all the way up to level 8, but do not let go yet. If you have cast either Defender or Lucid Barrier, the swirling fire attack will do no damage, or very little damage to you.

Next, the beast will perform its charging head butt attack. If the Lucid Barrier is still on, you will take no damage from that, either. Your sword should still be charged at level 8. Now, the beast will either appear from the top of the screen, or appear from the bottom of the screen - WAIT until his full body is in the screen, or better yet, wait until after he casts his level 8 Wall spell. Don't bother dispelling it, as it will just cast it again. Position Randi so that he is directly in front of the beast's chest, then let your power attack go. Charge up again to level 8, and while the beast is probably pounding you with level 8 Lucent Beams, have Purim cast level 8 Cure Water (DO NOT CAST WALL). If you're lucky, you'll get two full power attacks in before the beast leaves the screen. Be prepared for a charging head butt from the side of the screen, though. You may take some damage from this depending if Defender has not worn off. As the beast flies back to the background of the screen, have Purim recast Defender and Lucid Barrier - and if Mana magic has faded, have both Purim and Popoi recast Mana Magic. Keep this up until he start to turn grey, which means he has been defeated. It's the long way, but it works.

The trick to beating the Mana Beast the cheap, easy way is in one spell: Moon Energy. If Randi's levels are high enough, casting Defender/Lucid Barrier at the start of the fight, should not be necessary. You still need to have Purim and Popoi cast level 8 Mana Magic on Randi, though. When the beast is in the background of the screen, better yet, before his body fully shows up on screen, have Purim cast a level 8 Moon Energy on Randi. Now each hit you do should deal 999 damage to the Mana Beast. Don't bother charging up...just wait until 100% power and attack for 999 damage. Rinse and repeat. If you're fast enough, the Mana Beast will die in the first round of combat.

The backstory of Legend of Mana reveals that a Mana Beast of that world is in fact a Flammie from Fa'Diel's ancient times.[1]

The Mana Beast's Japanese name is the same as that for the species of Benevodons from later Mana series lore, and yet it is unclear if it is, in fact, a ninth Benovodon.

Retrieved from "https://mana.fandom.com/wiki/Mana_Beast?oldid=19816"
Community content is available under CC-BY-SA unless otherwise noted.