Wiki of Mana
Register
Don't have an account?
Sign In
Advertisement
in: Characters, Trials of Mana, Article stubs,
and 5 more

Malocchio (邪眼の伯爵, Jyagan no Hakushyaku?) (Jagan in the fan translation) appears in Trials of Mana, where he is one of the henchmen of the Dark Majesty. His identity and his past are unknown... He is a master of dark magic. He seems to be everywhere. He has a distinctive vampiric theme, down to one of his attacks depicting him sucking the player's blood.

Malocchio appears along with two monsters, a Carmilla Queen and a Wolf Devil. He uses many powerful Darkness-element spells, such as Black Rain, Dark Force, and Death Spell. He also uses lots of special magic, such as Ghost Road and Psychowave (which projects you across the battlefield). If you don't kill the Carmilla Queen and Wolf Devil, you can't damage him. It is best to fight him without using magic, as he seems to be programmed to counter your magic spells with one of his own. If you don't cast any spells, he will only cast a couple spells throughout the battle, making the fight much easier. Note that most level 2 and 3 Techs count as magic spells, and Malocchio will respond to them with devastating magic. 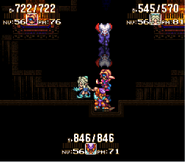 Battle with Malocchio in the Dark Castle 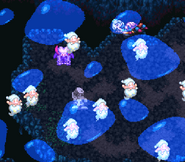 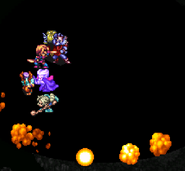 Malocchio in the remake