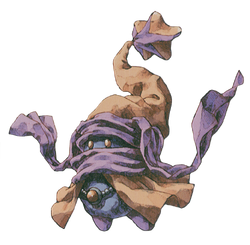 Official artwork of Louie from Legend of Mana.

Louie (ルーイ Rūi) is a character from Legend of Mana. 831 years of age, Louie is the custodian of the Junkyard, taking the discarded toys and magical creatures into his care. As an ancient magical creature himself, he is known to be able to empathise with the plight of his fellow brethren.

In stark contrast to his doll brethren Magnolia, Louie is comparatively milder-tempered, electing to lead a life of calm, placid tranquility, as opposed to nursing a deep-seated hatred for humanity. Visiting him in his room in the Junkyard proves as much, where he can be observed to be hopping about in a carefree manner and brewing tea on occasion.

Although aware of the fact that humanity had effectively abandoned both him and the discarded toys, Louie does not follow his brethren in nursing am unslakable thirst for revenge against his makers; he instead adopts a neutral stance, electing to watch over the toys from the sidelines but never actively participating in any action to either resolve the feud or funnel it.

Retrieved from "https://mana.fandom.com/wiki/Louie?oldid=12547"
Community content is available under CC-BY-SA unless otherwise noted.