Wiki of Mana
Register
Don't have an account?
Sign In
Advertisement
in: Characters, Article stubs, Sword of Mana Non-Player Characters,
and 5 more

Li'l Cactus (サボテン君 Saboten-kun, lit. Little Saboten) is a recurring character in the Mana series of games, debuting in Legend of Mana. An anthropomorphic cactus, Li'l Cactus is described to be shy and of few words, although he is inclined to think about many things.

Li'l Cactus serves as a recorder in this game, taking up residence in a pot that is located in the Hero/Heroine's house in their upstairs bedroom. Whenever the player leaves the room after having recounted the details of their most recent adventures with him, the prickly plant runs over to his leaf journal (tacked onto a pillar) and jots down his thoughts on said adventures.

This mysterious plant lives in the Cactus house. He moves from place to place extremely quickly, never getting out in the open. Trying to talk with him will render some rather unique journal entries.

As his in-game description states, Li'l Cactus is a rather shy character, choosing to remain inanimated and silent each time he is in the presence of his master/mistress. His diary entries lend a whole new dimension to his personality, however; for one, it is evident that he has a very short attention span, given how most of his entries depict him butchering the stories that his master/mistress imparts to him, albeit in an endearing fashion.

It is through this endearing writing style that one can deduce Li'l Cactus is as juvenile and mischievous as he appears; his simplistic summaries of his master/mistress' adventures are peppered with quips that make light of the situations that they find themselves embroiled in.

In Legend of Mana, Li'l Cactus' mischievous, impish personality is explored through Daddy's Broom, where, in a fit of naughtiness, he steals Lisa's broom and discards it in the Junkyard, referring to it as "rubbish".

In spite of this, Li'l Cactus is not one who is in possession of malicious intents; his actions in the eponymous Li'l Cactus quest proves as much, where, upon learning that Bud's has come down with an illness, he selflessly sets out from Home and goes on an unseen adventure that culminates with him obtaining a curative potion from pirates.

Li'l Cactus appears in an optional sidequest exclusive to the 3D version. It hides in 50 locations throughout the world; for every 5 found, the player will unlock a new feature or reward to be claimed. Only one of these is mandatory.

In Dawn of Mana, there are signposts that resemble Li'l Cactus. 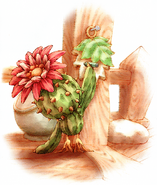 Concept artwork of Li'l Cactus from Sword of Mana.