This article discusses a subject without an official name in Square Enix material. The current title is simply a placeholder until an official title has been established.

La Famille Von are a family of cannon operators in Trials of Mana. They provide fast-travel services all over the world. Unlike in Secret of Mana, cannon travel is free and is an integral part of the adventure.

An eccentric inventor in the Free City of Maia who designs the first of the cannons in the network. He is both hyperactive and forgetful in his excitement over his creation. He needs a keg of nitromyte from the dwarves to complete his project. Operates the route from Maia to the Molebear Moors, but has terrible aim.

The party can obtain the Will to Fight Chain Ability by talking to Von Boyage after being shot away toward Molebear Moors.

Boyage's sister in Maia, who can be seen tending to their house and is therefore not an operator.

Boyage's identical brother, who installs a cannon overnight in the Valsena Castle courtyard. Operates the route from Valsena back to Maia. He boasts better accuracy than his brother.

A cousin to the Von family who disguised herself as an Amazon guard of Laurent. She operates a temporary route from the Heavensway to the Merchant Town of Beiser.

Von Boyage's Japanese name is a recurring name in the Mana series, first seen in the original Final Fantasy Adventure as an inventor who created Marcie to investigate the Dime Tower. It is the Japanese transliteration of the French phrase that wishes a person "safe travels".

Likewise, the localized names used in Trials of Mana are corruptions of French words and phrases. Bonjour translates as "good day/morning" or "hello"; bonsoir is "good evening"; and merci means "thank you". 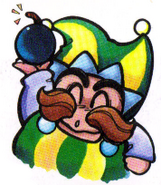 Chibi art from guidebook
Add a photo to this gallery
Retrieved from "https://mana.fandom.com/wiki/La_Famille_Von?oldid=27896"
Community content is available under CC-BY-SA unless otherwise noted.