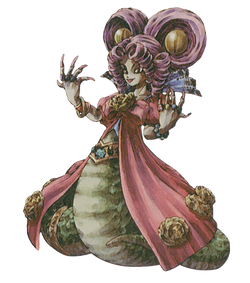 Official artwork of Kristie from Legend of Mana.

Kristie (クリスティ Kurisuti) is a character from Legend of Mana. 38 years of age, Kristie is a half-snake being who is the wealthy owner of Geo's palace, a building which doubles as an art gallery. Narcissistic and materialistic, Kristie is known to prize art, money and herself above all else.

A woman who lives in the very lap of luxury itself, Kristie is every bit as materialistic as her in-game description suggests; the very fact that the Palace of Arts that she owns is decked out with every manner of luxurious finery proves as much, alongside her ever avaricious desire to acquire more expensive works of art. It is also through this insatiable need to appear garishly glamarous in the public eye that one clearly sees Kristie as quite a narcissistic person, influencing all who visit her domains to perceive her to be a refined, cultured woman.

Despite this, Kristie has proven to be quite kind-hearted, a fact that is especially explicated through her interactions with Sotherbee. Although he is but a servile butler, Sotherbee is quite evidently regarded more as a trusted aide and confidante than he is a servant; in Alexandrite, for one, she does not hesitate to reveal her superstitious view on the supposed curse revolving around Jumi cores when Sotherbee questions her. Also, in Niccolo Calls It Quits?, when Kristie takes ill, she assigns Sotherbee the role of her spokesperson to speak on her behalf, clearly indicating the boundless trust that she harbours for him.

Retrieved from "https://mana.fandom.com/wiki/Kristie?oldid=12175"
Community content is available under CC-BY-SA unless otherwise noted.