Jinn (ジン Jin), also known as Sylphid, is the Mana Spirit of Wind. He appears as a humanoid creature that resembles an Arabian-style genie. He holds a bag, which could be assumed to be a nod to his etymological origins. While his spells include wind powers such as air blasts, cutters, and tornadoes, they also include the powers of lightning, the ability to suspend enemies in the air temporarily, and of sound (evident through his Silence spell in Secret of Mana). One of his spells allows for the disarmament of traps and the proffering of information about specific targets, while his weapon enchantment makes attacks more likely to land critical blows. In Trials of Mana, he is granted Defense Down and Speed Up abilities so as to counter Gnome's hold on these powers in Secret of Mana.

He appears as either submissive or quirky. 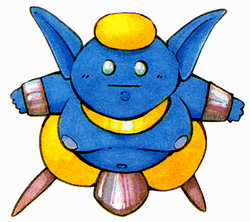 Sylphid is found in the Wind Palace after Randi and his friends overcome the Spring Beak. His spells include Thunder Saber, Analyzer, and Balloon for Primm, and Air Blast, Thunderbolt, and Silence for Popoi. 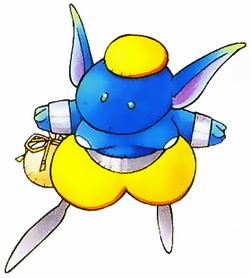 "I see. Well, you all saved my life. I'll stick with you to the bitter end!"
—Sylphid

Sylphid is the third Mana Spirit the heroes meet on their travels. He resides in the Gusthall near the Windstone. The heroes travel through the Gusthall to ask for his help in retaking the Wind Kingdom of Laurent. When they reach Sylphid, however, they find that he has been accosted by the Darkshine Knight. The Knight uses Sylphid's powers to summon Harcypete, and then leaves the heroes with the monster. After Harcypete has been defeated, Sylphid joins the heroes and assists them with their quest.

According to the lore of the Wind Spirit Hat and the Wanderer class, this hat is bestowed upon by Sylphid to those who are able to communicate with him and gain his favor. Curiously, no such quest to undertake gaining his blessings exists, being only given with a Gear Seed. 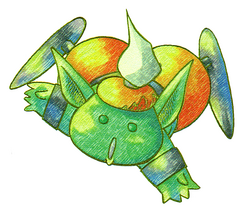 In the world of Fa'Diel, Jinn is regarded as the Spirit of Wind, and is said to be responsible for the world's weather. 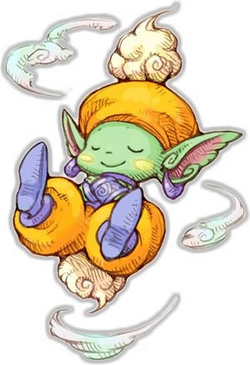 "This will be a breeze!"
—Jinn

Like his fellow spirits, Jinn can accompany the player character on their treks through Fa'Diel's myriad dungeons. He has a personality similar to a young boy in this game. His attack and support spells, respectively, are as follows: 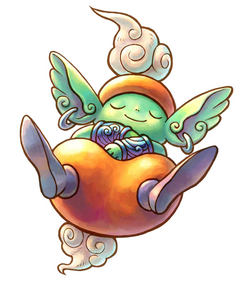 His spells are Thunderstorm (for Valda), Cyclone (for Qucas, Alma and D'Kelli) and Lightning Saber (for everyone else).

In Dawn of Mana, Jinn seems to have a whimsical attitude. His elemental power can cause a whirlwind, knocking enemies away.

Jinns or djinns (alt. pl. djinni) are one of the four elemental demons in the Arab mythology before the advent of Islam circa the 7th century A.D. Jinns are related to the element air (wind), while the other three classes of demons are fire efreets, water marids and darkness ghouls.

Retrieved from "https://mana.fandom.com/wiki/Jinn?oldid=36883"
Community content is available under CC-BY-SA unless otherwise noted.