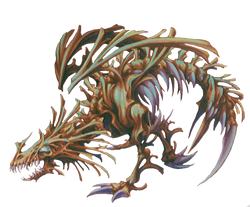 Official artwork of Jajara from Legend of Mana. 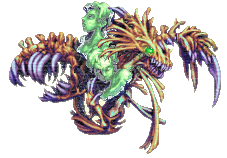 In-game model of Jajara II from Legend of Mana.

The Bone Dragon
Guardian of the Earth

Jajara (ジャジャラ Jyajyara) is a major boss character from the Dragon story arc of Legend of Mana. Revered as the Guardian of the Earth, Jajara resides in the Bone Fortress, where he stands guard over the Mana Stone that he has been entrusted with. The power emitted by the Mana Stone is renowned for having provided nourishment to the flora thriving in the hills that the Bone Fortress is located in.

Not much can be deduced about Jajara's character, owing to the lack of speaking lines ascribed to him. Nevertheless, it can be perceived that he is driven by a strong sense of duty, one that has compelled him to be stalwart in the vigil that he keeps over the Mana Stone entrusted into his care.

Nevertheless, when one compares Jajara to Akravator, it can be deduced that he is noticeably more hot-headed and aggressive, as indicated by the harsh language he uses to chastise Larc just before launching an assault in The Ghost of Nemesis. This is probably the reason that Jajara had, prior to the events of Legend of Mana, been able to successfully oust the formidable Deathbringer from his seat of power and thereafter bend his will towards him.

Retrieved from "https://mana.fandom.com/wiki/Jajara?oldid=13268"
Community content is available under CC-BY-SA unless otherwise noted.