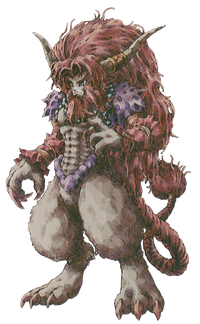 Official artwork of Irwin from Legend of Mana. 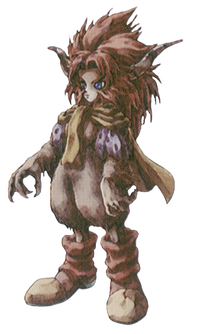 Official artwork of Irwin as a youth from Legend of Mana.

King of the Faeries

Irwin (アーウィン Āuin) is a major antagonist from the Faerie story arc of Legend of Mana. A half-demon who is a childhood friend of Daena, Escad and Matilda, Irwin is particularly close to Matilda. During an incident that took place in the Ulkan Mines several years prior to the events of Legend of Mana, Irwin took away Matilda's elemental powers, causing her to age much more rapidly then she was supposed to.

Of unknown origins, Irwin is a being who is conceived from the union between a human and a demon. At an unstated point of time during his childhood, Irwin befriended Matilda, an individual who was fated to become the future priestess of the Gato Temple.

According to a tale that is recounted by Pokiehl during the proceedings of Pokiehl: Dream Teller in the Ulkan Mines, ten years prior to the setting of Legend of Mana, Irwin succeeded in convincing Matilda to escape the oppressive confines of the Gato Temple. He thereafter led her on an excursion to the Ulkan Mines, intending to give her a taste of the freedom that she craved. After walking through a cavern where the walls emitted sulphur, Matilda began showing signs of distress, to which Irwin sought a relatively safer refuge before urging her to take a break. Moments after they do so, a rumbling sound is heard echoing throughout the Mines, as the entrance caved in due to old age. In a state of fright, Matilda began to vocalise her panic. Irwin then attempted to reassure her by stating that her life was protected by the spirits of her ancestors, to which she passionately proclaimed that she did not want to be the priestess, as the position forbade her from befriending demons. Bitterly reminded of the prejudice harboured against his demonic heritage, Irwin responded by sarcastically asserting that he was not her friend, and that he merely wished to devour her, as per the prevailing view of the demon race. Matilda, aware that he was merely speaking out of spite, then expressed a desire to enter the Underworld in order to liberate herself from the control of adults.

Irwin soon became discomfited by the growing darkness, and thus urged Matilda to summon her spirit, intending to use it as a guide to find a way out of their predicament. Upon compliance, Matilda revealed a reluctance to return to the Gato Temple. Unable to withhold his outrage at the oppression Matilda was subjected to as the future priestess any further, Irwin announced his promise to destroy the world on her behalf, emphasising their right to freely utilise the power at their disposal in order to live as they deemed fit. As he proceeded to seize Matilda's soul and chant an incantation to assume dominance over it, Escad, who had been following after their trail, entered the scene. Completely misunderstanding the situation at hand, Escad immediately assumed that Irwin had stolen Matilda's soul for evil purposes, and rushed towards him in an attempt to stop him. A bright flash of light was then dispersed from Irwin as he exercised his newfound power, one that sent Escad to the Underworld and presumably warped him and Matilda out of the Mines. As a result of having had her elemental powers stolen by Irwin, Matilda began to age at an alarming rate, appearing in the events of Legend of Mana as a bedridden old woman.

At some point of time after the Ulkan Mines incident, Irwin manages to bend the will of the Faeries to him, and is revered as their king.

Irwin makes his first formal appearance during the events of In Search of Faeries in Lake Kilma, where Daena seeks him out in order to speak to him. After a spot bit of exploration in Lake Kilma, Daena finally found him, where she demanded to know his intention behind rallying the Faeries to do his bidding. Irwin placidly shirked the question, prompting Daena to further demand to know what he intended to do to Matilda, to which he again frustrates her by casually feigning nonchalance. Ticked off by his apathetic attitude, Daena attempts to attack him, but is casually swept aside. As she slowly gets up from the ground, Irwin urges her to inform Matilda that "it was only a dream when everything comes to an end" before departing from the scene.

Irwin later reappears in Star-Crossed Lovers in the Mindas Ruins. After Matilda casts a spell to break up a fight waged between Daena and Escad in the Dreamweaving Room in the Gato Temple, everyone, including the Hero/Heroine, are warped to different sections of the Mindas Ruins. Matilda is transported to the central plaza of the Tower of Wind, where, clearly exhausted after casting the spell, she lies face forward on the ground in pain. Irwin enters the scene shortly afterwards, and without saying a word, proceeds to ascend to the topmost floor of the Tower of Wind. Seized with a sudden surge of energy, Matilda picks herself off the ground and quickly hobbles after him to reunite with him.

Charged with guilt for having been responsible for causing Matilda to age prematurely, Irwin avoids making any reference to it, only doing so after a long pause following her muse over her wizened appearance. When Matilda marvels over his mature appearance, Irwin reveals that it is the result of having been exposed to the land of Faeries, where one can form one's desired appearance by imagining it. Matilda deduces this to be Irwin's central reason for wanting to bring her to the land of Faeries, but expresses doubt over the possibility of the Faeries accepting her. This evidently causes Irwin to feel a surge of emotional pain, as he angrily asserts that he has the power to control the Faeries' allegiance, and later chastising Matilda for always accepting things without question, insisting that her life is not a construct of others' desires. Although touched by Irwin's intentions, Matilda is unable to follow his plan, cryptically citing that the only choice available to her is to be free. Irwin then departs from her after asserting that he will attempt to destroy the world.

In the opening preamble of Heaven's Gate, Matilda reveals that Irwin has managed to locate the massive carcass of the Wyrm of Light, Lucemia, a behemoth monster which swallowed seven cities before dying following the devouring of a volcano, intending to resurrect it and plunge the world of Fa'Diel into chaos. The Brooch of Love artefact will then be entrusted to the Hero/Heroine, and they, alongside either Escad or Daena, will head towards Lucemia after briefly attempting, but failing, to convince Matilda to halt Irwin's plan. Upon reaching Lucemia's head ("Leaving Sorrow Behind"), the Hero/Heroine will confront Irwin, and after engaging him in a fairly arduous battle, succeeds in defeating him. Matilda passes away shortly after his death, and is later inaugurated as the seventh Wisdom in the Underworld.

Following his death, Irwin is transported to Shrine of the Silent Faces in the Underworld, where he is hounded by the local Shadoles. Matilda enters the scene and, employing the power of a Spell of Truth by asserting that she is the universe, compels the Shadoles to disperse. When Irwin expresses awe at her power, Matilda establishes that it is the power of the "universe", and not her own, that is at work, where one's soul can create anything one desires in a flash. Possibly suggesting that everyone indiscriminately possesses the power to pave their life's course in accordance to their desires, Matilda moves on to state that Irwin wields the same power as well. In response to Irwin's bitter reply that he is a demon who only desires destruction, Matilda denies his proclamation, asserting that her ability to create her unique identity is entirely attributed to him liberating her from the predetermined social constructs. Irwin then reveals that Matilda has always been a "thorn in his heart", expressing a desire to be "born as a demon again" and to free himself from "a spell named Matilda". Shortly after proclaiming as such, Irwin fades away from the Shrine of the Silent Faces, presumably to be reincarnated. Left behind, Matilda is observed to sink to her knees and sob into her sleeves.

Irwin is a character who is inherently conflicted due to the antithetical nature of his heritage: he is a being who is the product of a union between a human and a demon. Throughout the events of the Faerie story arc, his struggle to reconcile the natural binary opposition that exists between his human and demonic sides is apparent; while the former is embodied by empathy, love and a desire for peace, the latter is defined by a reckless urge to destroy and desecrate.

As a result of his mixed heritage, Irwin is thus the subject of much prejudicial scrutiny by the inhabitants of the world of Fa'Diel. This is clearly evidenced through the hate-infused proclamations of Escad, an individual who has been conditioned to believe that demons are inherently evil and are motivated by an irrepressible urge to wreak havoc.

This hatred, one that conveniently overlooks the humanity that resides within Irwin, has inadvertently led to him being alienated and treated as a social outcast. This has in turn moulded him into an individual who is markedly melancholic and acrimonious from a young age. This is proven through his interactions with Matilda in the Ulkan Mines, where he, in response to her woeful comment on how social conventions contrived by adults restrict her from befriending him, furiously suggests destroying the world in order to free her from the fate she is bound to.

It is through this proclamation of Irwin's that one can also glean the deep love that he harbours for Matilda, as it bespeaks of the extreme nature of the indignity that he feels on her behalf, to the point where he is willing to go to such a horrific length in order for her to attain happiness in freedom. The words that he imparts to Daena in In Search of Faeries further proves this; the "dream" that he refers to in "it was only a dream when everything comes to an end" is a reference to the nightmare that Matilda undergoes as a result of her oppressive upbringing, and she will be liberated from it when the world is destroyed in his hands ("everything comes to an end").

Irwin does eventually attain a state of self-awakening, albeit too late after being sent to the Underworld following his death in the hands of the Hero/Heroine. He comes to the revelation that his plot to destroy the world is completely misguided, where he recognises that it is his love for Matilda, and not his demonic instincts, that has spurred his actions. His final words to Matilda in the Underworld prove as much, where he describes her as a "thorn in his flesh" and "a spell named Matilda", both of which metonymically represent the firm grasp that Matilda has over Irwin's heart, one that is at once constricting and painful ("thorn") and bewitching and enchanting ("spell"). This in turn highlights the irony that in his quest to attain the freedom to openly love the enchantment that is Matilda ("spell"), he has unwittingly allowed himself to be ensnared ("thorn") by said love to the point of no return (his heinous plot to destroy the world that ultimately resulted in his death).

The manga adaptation of Legend of Mana treats Irwin and Matilda's fate much more kindly, as they are reincarnated into babies following their deaths, who are raised by Escad and Daena.

Retrieved from "https://mana.fandom.com/wiki/Irwin?oldid=18642"
Community content is available under CC-BY-SA unless otherwise noted.