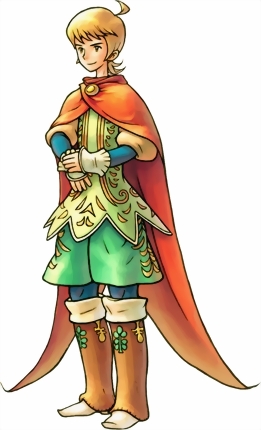 Pedda
v · e · d
The current boy king of Pedda. Somewhere in his childish mind he has taken pleasure in war and sees it as entertainment.

Inath is completely without morals and revels in the destruction he's causing, as he found the peace he was living in boring. Despite Roget being his childhood friend, he has no problem setting him up as the fall guy to start their invasion. Unfortunately, he's also quite bright as he was able to see the flaw in Roget's strategy of using the Benevodons again Pedda. He also asks Roget to come back to his side, but isn't affected at all when he is refused.

After Lowenburg is freed, Inath appears and reveals that the invasion was a farce, their way of setting up the mirrors in each kingdom. He declares Operation Psi to be moving to phase two and that the real battle has just begun before vanishing.

Inath is fought again at the castle in Pedda, and after going over his plans, summons the Vel Vimana, and uses it too destroy his own castle and most of the royal city in an attempt to kill Roget's group, not caring about how many of his own people he had just killed.

With the Mirage Bishop revealed as the real mastermind, Inath fights alongside him several times. He tells Roget that he found being a king boring and thought that creating a kingdom from scratch as a god would be much more fun. But his side is defeated and then he watches in horror as Baxilios betrays them and unleashes Anise's true power to destroy everything with Psi: starting with him. Moaning that all he can see is darkness, Inath is consumed by the very power he helped unleash in the first place.

Retrieved from "https://mana.fandom.com/wiki/Inath?oldid=20156"
Community content is available under CC-BY-SA unless otherwise noted.