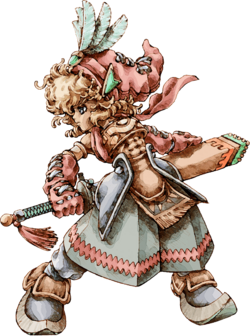 Official artwork of the Hero from Legend of Mana. 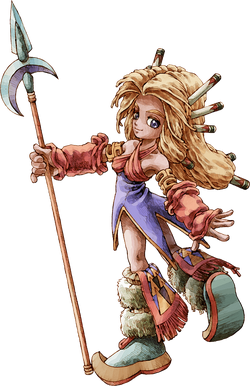 Official artwork of the Heroine from Legend of Mana.

“I'm back!”
—Hero/Heroine, upon returning Home after the events of Teardrop Crystal

The origins of the Hero/Heroine are never explained, either in-game or through external sources. Throughout the course of the game, the Hero/Heroine essentially acts as the taciturn observer of the litany of quests that they will come to accept on the behest of other central characters.

In the manga adaptation, both the Hero and Heroine are given unique identities and names; the former is known as Toto, while the latter is known as Imu.

Toto is described to be a complete idiot, has the tendency to cry excessively, is helpless over women, sometimes goes terminally insane and is an obsessive doll collector. His fanaticism as a doll collector especially extends towards the Final Fantasy character, Quistis. Despite his flaws, Toto is, nevertheless, a caring, protective, brave and funny individual, and his superior strength and skills are recognised by the characters whom he encounters. His best friend in the adaptation is Duelle, and they often get into arguments because of his stupidity. The 2H Sword that Toto wields is revealed to have been purchased at a supermarket at a really cheap price when he fought Drakonis.

Artwork of Toto from the manga adaptation.
Add a photo to this gallery
Retrieved from "https://mana.fandom.com/wiki/Hero/Heroine_(Legend_of_Mana)?oldid=18710"
Community content is available under CC-BY-SA unless otherwise noted.